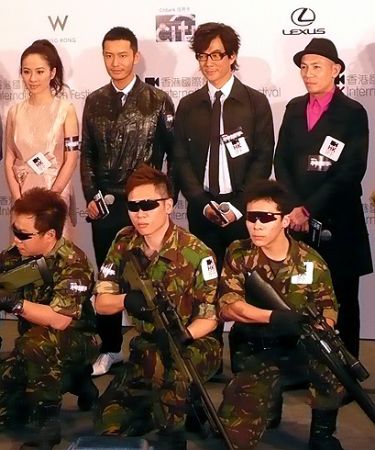 The past week has been a blur of films, receptions, after-parties and late night snacks. Hong Kong has been the epicenter of the Asian film industry, hosting four major movie events simultaneously.

In addition to the Hong Kong International Film Festival, and the Asian Film Awards (which was held on Monday night,) the four day Filmart and HAF film financing forum have just finished up.

During this period there have been several notable film launches. Wednesday night was the premiere of Hong Kong director Dante Lam’s new film, The Sniper. Starring Richie Jen, Huang Xiaoming and Edison Chen, the picture was originally scheduled to be released last year.

How did it turn out?

The additional post production time, and some extra editing, served the release well. The Sniper is an action movie involving a team of sharpshooters working for the Hong Kong police force. The plot centers around a former member of the team whose talent is only out matched by his apparent craziness.

[photopress:Edison_Chen_Sniper_movie.jpg,full,pp_image] The leading cast members, minus Edison Chen at the premiere.

The film features a lean plot that stays on track and remains sharp throughout. From what I’ve heard, a lengthy subplot involving Edison’s character ‘O.J.’ and his father was removed from the film. The result is a faster pace and arguably a stronger film.

The performances are executed well by Richie Jen, Huang Xiaoming and Edison Chen. Though there is a certain amount of bravado given the subject matter, there are also small, sophisticated touches involving the main character’s relationships. The film stays engaging throughout.