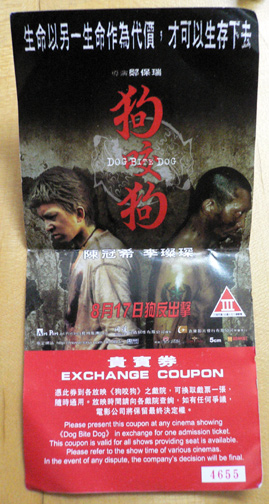 After returning from a long trip I recently got a chance to catch up on my Hong Kong movies! Dog Bite Dog, the new film starring Edison Chen and Sam Lee was on the top of my list. Several people had mentioned good things about it to me and I wanted to catch it before it left the cinema. It wasn’t playing on Hong Kong side, so I headed over to the Mongkok neighborhood of Kowloon to catch it at a theater on Sai Yeung Choi Street, one of the area’s main thoroughfares.

I had been given a free pass to check out the film, so there was no way I was going to miss it! When I got to the theater I saw an alternative poster for the film. The tattoo poster, as I call it, makes it look more like a gangster flick. The original poster, seems to imply the rivalry between the two main characters. It’s darker, more intense, and it captures the vibe of the film over the tattoo one. 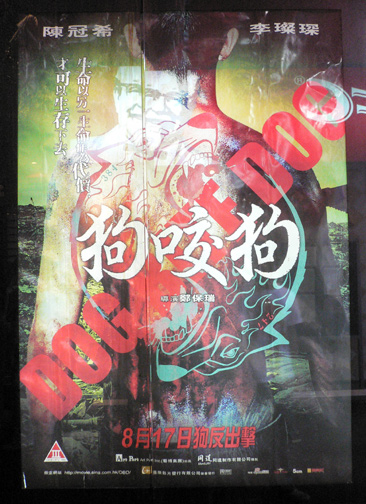 Dog Bite Dog is classified or rated as a category III film. Category III films are Hong Kong’s equivalent to the U.S.’s NC-17 rating and many of the ultra-violent or softcore exploitation films that are made here fall into that niche.

Dog Bite Dog is violent, gritty and extreme. One complaint I’ve heard about the film is the ending. It seems to have a false ending, meaning it could end at a certain point, and then continues for about twenty minutes more. Although I can understand that criticism, I can see why the director chose to keep it. The transformation of the two main characters wouldn’t be complete without the ending the way it is.

Dog Bite Dog is worth a watch if you’re a fan of old Hong Kong films from the 80’s, or category III films in general. Exploitation movie fans will also find it appealing. Sam Lee and Edison both give more adult performances, outside of their typical youth-oriented roles.