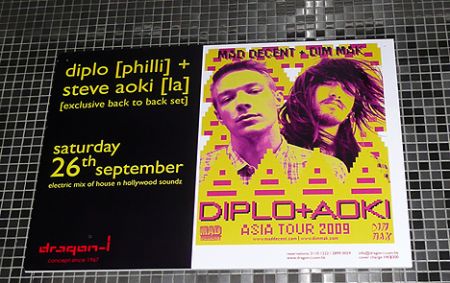 Mark your calendars, this is a dance floor dream-team if there ever was one! I’ve been waiting to catch Diplo for many years. He’s played in Shanghai, but never in Hong Kong. Volar and CLOT had both been interested in bringing him previously, but scheduling difficulties kept it from happening. Steve Aoki shouldn’t need much of an introduction. He’s played at Volar before, and also d.j.ed the Adidas Anniversary mega-event.

Combining these two talents in the same club is going to be dangerous!

Diplo is one of the major influences on contemporary dance music. “Paper Planes” by M.I.A. is a sample of his hit productions. Embracing niche styles of music from Africa to Brazil has differentiated him, and made his musical collages unique.

Diplo’s contributions over the last five years have changed the sound of dance music. (One could argue that Pop artists such as The Black Eyed Peas are in his debt.) His top-notch skills and creativity have made him an in-demand remixer for the cream of underground artists. Diplo continues to cover new ground, recently releasing a dancehall-inspired album under the moniker Major Lazer, with another famed producer, Switch.

If his mixed CDs are any indication of his talent as a live d.j., it’s going to be an incredible night. Combining Diplo’s killer beats with Steve Aoki’s crowd frenzy skills should make for an amazing energy.

How will it play with the Dragon-i crowd? From what I’ve seen, models have some sort of weird fascination with Steve Aoki. You can see them standing in front of the d.j. booth head banging and thrashing around as he plays.

I think they’ve watched too many Bloody Beetroots videos!

Free for members, cover charge of $300 HKD for non-members