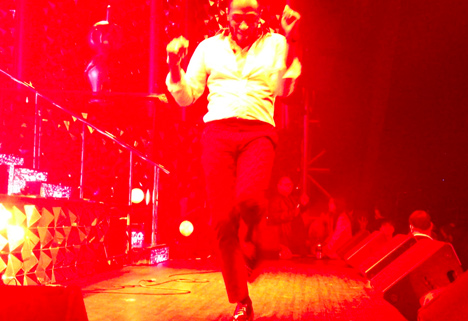 Unlike newer M.C.’s, who rely heavily on studio production, Yasiin Bey is a throwback to an earlier era of Hip Hop when rappers used their voice and verbal dexterity alone to hold a crowd’s attention.

Yasiin Bey, formerly known as Mos Def, performed on Christmas Eve at club Cubic, Macau, giving a one hour concert that ran through both his new material as well as his classics.

Whether rapping over a beat, or rhyming acappella, the veteran M.C. has built diverse skills at manipulating words in interesting ways. It’s not uncommon for him to switch up the pace, alter tones of words, and flip back and forth between singing and rapping – all in one song. Yasiin Bey is talented at using words as his instrument – in some cases used as percussion and in others to form melodies.

Adding another layer of complexity, his work pulls from all sorts of musical ancestors, as rich in Hip Hop allusions as it is in Reggae or vintage Soul. It’s the combination of all of these factors, plus his own notable lyrics that have made him a star and brought a crowd out to Cubic on a Monday night.

New York M.C.’s of his calibre have rarely visited Hong Kong in the past, so there was a good number of fans who made the trip. During the performance, they gathered towards the front of the club and kept things lively throughout the set.

Over the course of the night, Yasiin performed his own original material as well as freestyled over instrumentals. Towards the end of the show he even danced to a few rare grooves, showing off some steps that mimicked stars from an earlier era.