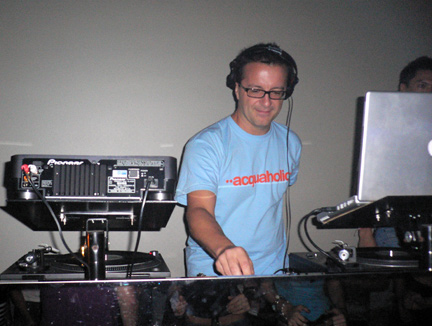 D.J. John Acquaviva recently passed through town and played at Volar. His choice of songs were solid, but the beat was almost too constant during his set. There were no highs and no lows in the songs. It was almost the opposite of the recent set by Joachim Garraud, where each song had a discernible, party-rockin’ climax. Although the music was good, it didn’t work the crowd into much of a frenzy because there was little build up within the songs. His mixing however was impeccable.

Actually, it’s hard to compare Joachim Garraud with other d.j.s because, unlike most people, he is playing instruments on top of the music he is spinning. As far as entertainment value, it does add a tremendous amount to see the d.j. actually doing something physical, rather than just standing in back of a laptop or mixer. Another fact to consider though is that a d.j. like John Acquaviva is mixing completely live, whereas Joachim Garraud may be playing a pre-set routine.