Clockenflap, Hong Kong’s largest and most international music event is set to take place on Friday, November 29th, thru Sunday, December 1st. The annual music festival, which was founded in 2008, is a cultural highlight that brings together new and legendary acts from around the world to perform alongside Hong Kong’s top bands and DJs.

The entertainment at Clockenflap 2013 is an interesting lineup of emerging and well-known artists. It’s not just a re-hash of whoever is popular at the moment, but also a place to discover brand new talents and catch big names who have never played in the city before. Hong Kong’s indie bands also get a chance to shine in front of massive audiences in one of the most beautiful outdoor concert settings in the world.

The location of Clockenflap is the West Kowloon cultural district, the future home of Hong Kong’s M+ art museum, situated on the edge of the city’s harbor. It provides astonishing views of H.K.’s skyline and enchants visiting bands that come to perform.

The well thought out festival is a big draw to a diverse range of the population and provides a fun atmosphere for all ages. In addition to seven stages, there’s a “silent disco”, art shows, a film tent and other facilities. For families, there are multiple children’s activities and play areas as well as food choices that are kid-friendly. (Children under 12 accompanied by adults get in for free!)

This is the biggest year yet for Clockenflap, with over 100 performers and three days of entertainment. Last year’s event drew 20,000 attendees, and this year is meant to surpass that record. 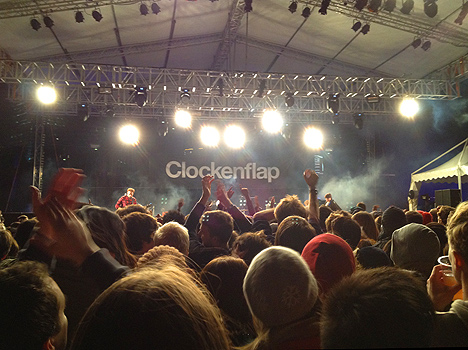 The three-day festival is packed with names that would normally headline shows of their own. On the schedule are genres ranging from Rock, EDM, and Folk, to underground ethnic musicians, and indie bands of all stripes.

For music lovers, Clockenflap represents a once-a-year buffet and the chance to feast on an assortment of highly rated musicians at a reasonable price.

Although there are too many highlights to point out, we recommend catching Franz Ferdinand, 2manydjs, Four Tet, Modeselektor, Uptown Rockers, Willow Beats, Hanggai, La Femme, Regurgitator, Efterklang, Cui Jiang, G’Old Korean Vinyl, Wordy & Soulspeak, and Ellen Loo to name just a few! In addition, there are a whole host of local DJs who we recommend.

Keep in mind that there are several different variations of tickets. Visit the Clockenflap ticket site for details.

Here are our Top 5 Tips for Clockenflap!

1. Bring cash – there are no ATMs located at the festival, though there are many food stalls and drink tents to tempt you! (The closest ATMs are located inside Elements shopping mall, in the lower level, nearby the MTR (Kowloon Station.)

2. Depending on the weather, it’s a good idea to bring a jacket. The location on the harbor-front can get chilly at night. At the very least, you can use it when you sit on the grass!

3. Learn the map. With multiple stages, some set quite a distance apart, occasionally you need to plan out your day to avoid missing the start of a musician’s set.

4. Learn where the bathrooms are and go before you really need to! Some banks of portable toilets have long lines, while others will be much less crowded.

5. You don’t need to stand at the very front of the stage. There are great views of the bands from the back as well, so you don’t need to be stuck elbow-to-elbow with people unless you want to!