The several thousand strong audience cheered throughout the night as they were treated to multiple performances including a fashion show, beatboxer, dancers, roller-bladers, and several DJs, in addition to the main acts.

The huge concert hall was packed with people snacking and checking out a special 3D printing exhibition featuring local celebrities.

A larger-than-life stage with multiple viewing angles provided the huge crowd excellent views no matter where they were positioned.

The scale of the production screamed big budget, from the choice of venue, to the headlining acts, to the enormous banners that hung throughout the hall.

Rather than an influencer event, this was a full-on consumer facing bash, with top quality entertainment.

K-Pop supergoup 2NE1 were the highlight of the night, bringing the most energy to the room. From the moment they jumped on stage, the entire place was rocking. Several times the floor started to shake as their fans jumped along to certain parts of their songs.

The singers were excellent at interacting with the crowd and constantly moved around the stage to let everyone feel connected. The group members gave off different personalities which made the performance more endearing to the audience.

Check out our exclusive video of 2NE1 performing!

Hong Kong superstar Eason came out directly following 2NE1. He performed two songs, an energetic uptempo one with a big dance routine, and a slow song.

Between the top notch acts and the fun environment that Adidas created in the hall, it would be hard to find anyone who went away unsatisfied. 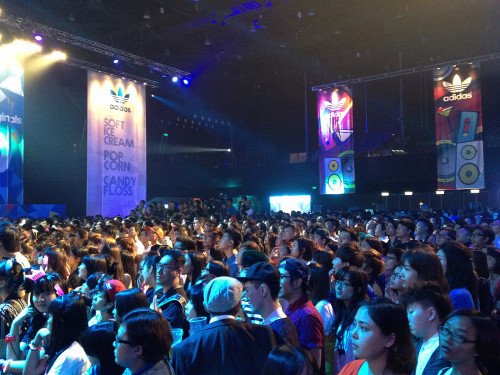