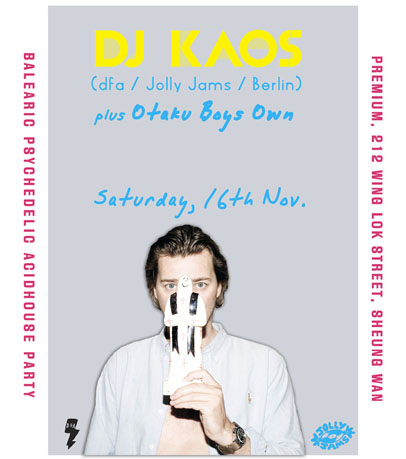 Berlin based producer DJ KAOS has been involved in cutting-edge street culture for over three decades. Since the 1980’s he’s been a part of highly influential graffiti, skateboarding and music movements around the globe.

Otaku Soundsystem are back with another veteran DJ who plays music not typically found in Hong Kong’s mainstream venues. DJ Kaos, who is both an accomplished remixer and producer, is also the founder of his own label, Jolly Jams. Over the years he has released music by Tiago, Eric Duncan, The Backwoods, and Dr Beat.

As a recording artist, DJ Kaos has had a lengthy career of his own. He’s put out music on James Murphy’s DFA Records, was a member of Terranova, as well released a much loved mix via DJ Kicks. He’s remixed a diverse range of artists including Manuel Goettsching (E2E4), Roxy Music, and Brian Ferry, in addition to collaborating with artists such as The Rapture, The Hundred in the Hands, and Erlend Ã˜ye.

The invite says Saturday is a “Balearic, Psychedelic, Acid House party,” and we’re not sure exactly what that is, but it sounds promising!