The Open Sesame music festival, which takes place on August 15th and 16th, is a good example of just how much Hong Kong has recently changed. The city has gone from only one annual outdoor music festival – Clockenflap, to outdoor events of different sizes happening seemingly every week.

The nightlife and entertainment scene itself has grown exponentially over the last three years, to the point where it’s difficult to keep up with all the events happening each week.

Where once Hong Kong’s party scene consisted mainly of rotating between a handful of clubs, it has transitioned to include trendy restaurants that double as nightspots, as well as upmarket cocktail bars and pop-up parties with unique themes.

The explosion of these new types of venues has completely shifted the sophisticated set away from clubs, and driven them more toward artisan drinks and mixed-use places where people can actually talk. Likewise, the young and newly arrived have been lured en masse to destination-based events, from bunkers, to islands, rooftops, and beaches.

On an entirely different level, the city’s nightlife now includes an entire class of young people who didn’t previously exist in Hong Kong just a few years ago. Newly installed exchange programs bring thousands of foreign students to H.K every few months. Because Hong Kong’s drinking age is 18, rather than 21, as in the U.S., foreign students are enthusiastic partygoers.

In addition to students, there has been a large influx of young professionals employed at multinational companies that have relocated from Mainland China, as well as new arrivals from Europe who are looking to expand into Asia. The end result is a huge new wave of partygoers seeking entertainment options that have no predispositions about where to go.

The Good, The Bad, and The Ugly

The bad part about this new crowd is that it ends up not integrating with the existing nightlife scene. In the old days, people were forced to band together and discover each other due to the lack of nightlife options. That reality no longer exists. Instead, Hong Kong has joined other places like Shanghai that have nightlife scenes that are completely divorced from the city they’re in. It’s almost like a bubble scene operated by outsiders for outsiders. With a heavy reliance on social media, events catering to newcomers seem to be thriving.

There’s lots of upheaval in the nightlife industry at the moment. Insiders that haven’t thrown out all of the previous rules about Hong Kong nightlife are getting lost in the dust – including many Lan Kwai Fong veterans.

A majority of the new nightlife population are more likely to drink on the street, or in a remote park or a beach, as they are are to attend one of Central’s clubs. For many young people, Lan Kwai Fong is over-priced, obnoxious, and creepy. Whereas the bottle-popping local scene still exists, the younger local and overseas Chinese are no longer as likely to participate, or even want to indulge.

Taking the show on the road

Once a golden rule, geographic location no longer matters. To the city’s new nightlife crowds, being just a short ride from Central is no longer a prerequisite. This is due to the fact that foreigners and the newly arrived are no longer clustered around Central, but spread out all over the place. (For example, there are enclaves of students living in Sham Shui Po, and Jordan.) Secondly, people have transitioned to attending destination or theme-based events with little regard for the location.

From a local’s standpoint as well, the world no longer revolves around Central. With the rise of Instagram stars, a huge new number of influential young locals now come from New Territories and Kowloon. Well-connected individuals from Hong Kong Island don’t have a stranglehold on defining trends in the city.

This past weekend alone two events were held that couldn’t have existed just a few years ago. The Outlook music festival, which was organized by veteran promoter Mandy Hui (from Magnetic Soul,) was centered around Bass music, and took over a large outdoor space far away from the city. (Regrettably, Hong Kong Hustle didn’t have a chance to do pre-coverage for the Outlook Festival, or attend! This is a shame because this is exactly the type of event that deserves our coverage. From what we saw on Instagram, the night was filled with amazing performances and music – including a live Ska band!)

Another example is last Saturday’s Rewind party, which has grown from a small rooftop gathering into a huge Sunday afternoon House music event. Departing from the rooftop this time, they held a session at Shek O beach that gathered a massive crowd dancing and socializing in one of the city’s far away locations.

Open Sesame – an outdoor music event with a local focus

Coming up on the weekend of August 15th and 16th is another outdoor music festival, this one focusing more on local bands and talent. The two-day festival, called Open Sesame, features over 40 acts including bands and DJs. The event takes place at a remote campsite near Yuen Long.

In the past, no one could be bothered to travel so far to go to an event. The prevailing wisdom was that it was even difficult to get people to travel to Kowloon for a major party. Thankfully, this train of thought is quickly disappearing, which makes for a much more diverse and robust Hong Kong nightlife scene. 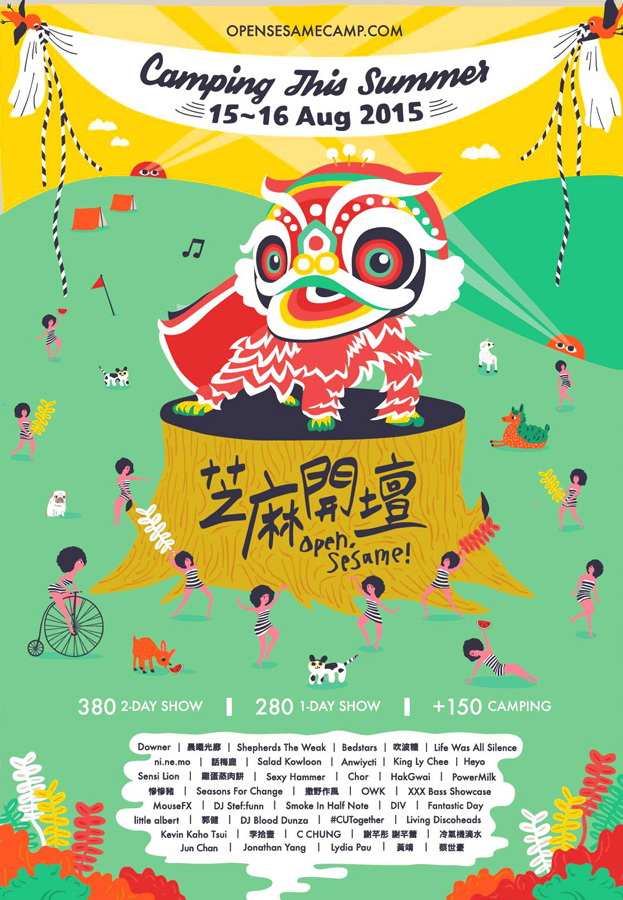 Saturday, August 15th, and Sunday, August 16th, 2015
Open Sesame Camp
Please check out their website, and Facebook page for additional info on the full line up as well as transportation options. The closest MTR station appears to be Kam Sheung Road.