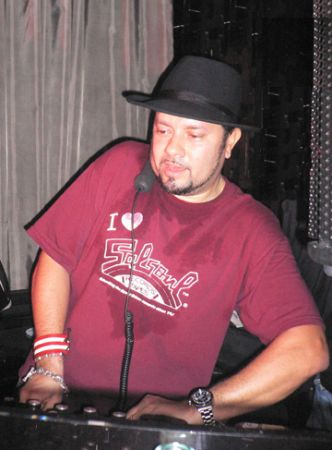 I arrived at Dragon-i early even though Louie Vega is known for his marathon sets. Last time he was here he ended up d.j.ing into the early morning hours, and at 5 am, ate a salad while playing! I was curious how he would begin his set this time…

Sometimes it’s difficult for a headlining d.j. to transition or differentiate themselves from the opening act. Not so with Louie Vega. His talent for selecting music that grabs you was evident from his first few tracks.

Although I’m not much of a House afficianado, I appreciated the different directions he took the music during his set. I could hear the influences of Disco, Soul and other genres blended together seamlessly. I was a little surprised that two songs I occasionally listen to – Georgio Moroder’s “The Chase,” and The Jungle Borther’s “I’ll House You,” also made it into his mix. As a music lover myself, it was a treat to hear a d.j. of his level perform. Louie Vega worked up a sweat constantly mixing and tweaking the treble and bass of each track.

For Dragon-i owner and music lover Gilbert Yeung, this is the highlight of the year. Little Louie Vega is responsible for a huge catalog of influential songs and is a towering figure in the history of House music. Gilbert’s personal taste in music ranges widely, however, Louie Vega occupies a special place in his heart!

At a certain point in the evening – one that Gilbert may never forget – Louie Vega asked Gilbert to climb behind the turntables and d.j. alongside him. For the uninitiated, this is the equivalent of someone who idolizes The Rolling Stones being asked by Mick Jagger to play guitar on stage with the band. Gilbert was elated!