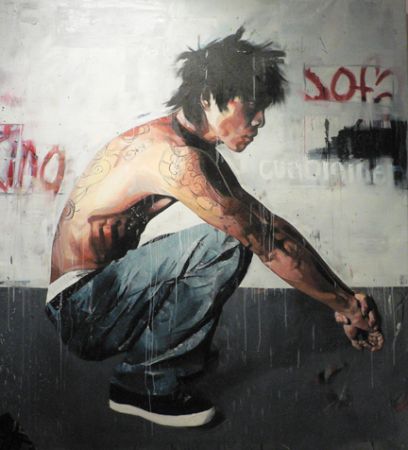 I can’t comment on the entire local art scene, but for the hipster circle I can offer a few insights. Recently people have been migrating to Chai Wan – a neighborhood at the far Eastern point of Hong Kong Island. In particular the building called Chai Wan Industrial City, is getting hotter. Home to several popular photography studios, the former warehouse is drawing more devotees due to its large spaces and cheap rents (a near impossible to find combination in Hong Kong!) Two new arrivals in particular have been bringing a new audience and vibe to the area.

The new tenants on the sixth floor, Six Keyz and the Chancery Lane Annex have brought a flood of visitors to a neighborhood that’s on the outskirts of civilization for most city dwellers.

Take an industrial elevator up to the sixth floor and follow the sounds of skateboarding if you’re looking for the Six Keyz space. The majority of the Six Keyz room is taken up by a large half-pipe! The ramp and the perimeter of the space contain artwork. Six Keyz is a crew of skater / designer / musicians that grouped together to open the space. Thursday’s exhibition titled BURN featured graffiti by two New York artists.

On the opposite end of the building, down a long hallway is the annex of Soho’s Chancery Lane Gallery. Check out my previous post here to read about their opening.

Last Thursday, the annex was filled with paintings by Simon Birch. As far as talented people go in Hong Kong, Simon is hard to beat. Active as a painter, a d.j., a street artist, a promoter and a curator, his name is all over town both figuratively and literally!

Simon is poised for big things in the new year with shows in both Los Angeles and New York. What makes him special? He’s got the painterly finesse of a classically trained artist paired with a contemporary street sensibility. Possessing the two traits together is uncommon, and makes for some exciting art.