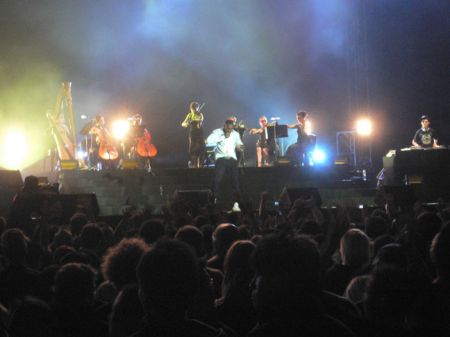 I finally got around to selecting photos from the over two-hundred I took on the night of Kanye West’s first Hong Kong performance. The concert was a very big deal for the city. H.K. is not considered a first tier stop on the international concert circuit and seldom do artists visit the city for a show at such a peak in their career.

Once again, compliments go to the CLOT crew for masterminding the event and for pulling off an interesting new venue.

West Kowloon, a new harbor-front area of reclaimed land located next to Tsim Sha Tsui was the site of the outdoor event. The large open space is now being used as Hong Kong’s first Drive-In cinema (more on that in a subsequent post!)

Arriving at the venue there was a stream of concert goers making their way through a series of check points. The large crowd was a real cross-section of society. Music lovers from all walks of life turned up – everyone from older expats to young locals.

The concert began with a set by opening act and CLOT founder Edison Chen. During his performance, Edison did an acappella rap about his recent accomplishments that I liked. His flow wasn’t perfect, but the content was solid old-school boasting. After a short pause, Kanye took the stage and performed a long set featuring many of his hits from the last two years.

Standing on the stage staring out at Hong Kong’s dramatic skyline, Kanye mentioned that for the view alone, he would love to perform again in the city. We hope he’ll be back!

Click on any of the images below to have a look at the concert night!