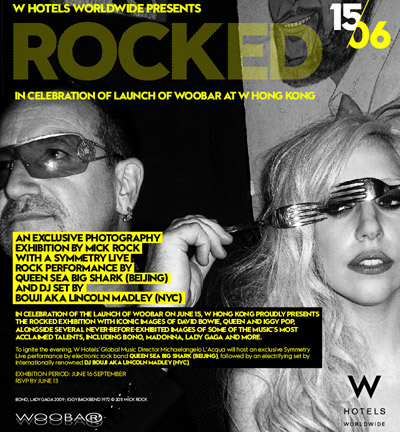 The W Hotel prides itself on being hipper and more contemporary than its rivals and one of the ways they have differentiated themselves is by offering a sleek nightlife experience in-house.

On Friday, June 15th, the W is launching the Woobar, taking over the space that formerly belonged to the ‘Living Room’ on the sixth floor of the hotel.

To christen the new art and music venue there will be a live performance by veteran Beijing rockers Queen Shark Big Sea, as well as music by New York’s DJ Bouji. And that’s not all.

Coinciding with the opening, the W will also be holding a photography exhibition by Mick Rock (whose nickname is “the man who shot the 70’s”.) The show includes scores of definitive photos of musicians ranging from Blondie and David Bowie, up to Lady Gaga!

Strategically situated in urban and exotic capitals around the world, W Hotels form a circuit that can be tapped to host traveling art exhibits and guest DJs.

In the midst of a massive expansion into Asia over the next few years (including new properties in Shanghai, Beijing, Guangzhou, Singapore, Macau, and Jakarta,) regional tours are a very exciting and real possibility for the hotel chain.

With Woobars already up and running in Seoul and Taipei, let’s hope that this is just a taste of the good things to come.