Dragon-i, the iconic Hong Kong nightclub marked its 11th anniversary on Wednesday with a performance by Wonder Mike and Master Gee of the Sugarhill Gang, along with a set by top House music DJ / producer Solomun.

In 1979, the Sugarhill Gang were most people’s first taste of Hip Hop music and their hit single “Rapper’s Delight” remains a popular song nearly 35 years after its debut.

Two of the three original members were on hand to perform a set that included “Apache,” “Rapper’s Delight,” “The Message” by Grandmaster Flash and the Furious Five, as well as “Lala Song” by Bob Sinclar.

For a little history, the early days of Hip Hop were kind of like a Wild West, with no one in the music industry taking ‘Rap’ seriously and lots of people getting ripped off. Sugarhill Gang, who recorded “Rapper’s Delight” almost as a fluke, built the song around other people’s rhymes, (namely from Grandmaster Caz,) and other people’s music, (the bass line from Chic’s “Good Times,” is essentially the backing track.)

Regardless of the origins, the song was a major commercial success and gave people around the world a peek into the sound that was emerging out of New York City.

On Wednesday night, the guests who packed Dragon-i’s terrace were transported back in time for the night’s retro theme. After a traditional lion dance, the Sugarhill Gang took the stage and performed their set. 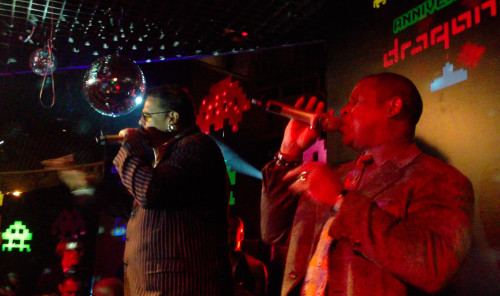 The music, which avoided commercial hits, was masterfully crafted with a song selection that got the crowd moving at once.

Eleven years at the top of clubland is an extremely long time to stay relevant. By bringing a diverse range of musical talent to Hong Kong for over a decade, Dragon-i has maintained its place as one of the city’s top clubs. Congratulations to Gilbert and the entire Dragon-i team. Happy 11th anniversary!

Have a look back at a few of Dragon-i’s previous anniversaries: with Calvin Harris, and Roy Ayers, and with Boy George.