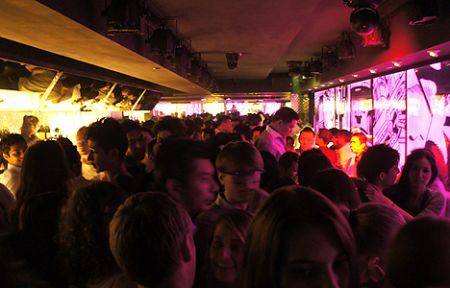 The newest incarnation of Club Play, which was formerly located in the basement of California Tower, held a soft opening on Thursday night, taking over the space previously occupied by SUGAR.

One of the larger venues in Hong Kong clubland, the renovated space is now shaped something like a barbell, with a long hallway connecting two bigger rooms.

The club is designed to support two d.j.s simultaneously, one at either end, and has a significant number of large booths in both rooms. (This is important for bottle sales, and for accommodating H.K. style partying.)

One side functions more as a lounge area, and is equipped with two pool tables.

The larger side, towards the front of the building, includes the main dance floor, a stage, and a generous amount of seating.

Even the long corridor running between the two rooms contains a large number of tables and stools. While this makes the space narrow during big nights, it’s a good option for monetizing the space.

One interesting design feature of the club is the use of back-lit panels that line the walls in both the lounge and club rooms. The even-sized panels feature graphics that look like stills from comic books. As the backing lights change color, they bathe the room in variable hues.

The soft-opening featured a diverse crowd composed of young veterans of city’s nightlife scene. The music for the night was mainstream and the d.j. could be seen singing along to the Pop songs he played.

The various share-holders brought together an interesting mix of partygoers for the soft opening. It will be interesting to see who turns up as the regular crowd and how they arrange the large space on slower nights.

Club PLAY
1/F, On Hing Building
1 On Hing Terrace (up the stairs at the corner of Wyndham Street and Wellington Street.)
Central, Hong Kong

[photopress:california_tower_lan_kwai_fong_hong_kong.jpg,full,pp_image] The site of the former Club Play in Lan Kwai Fong!