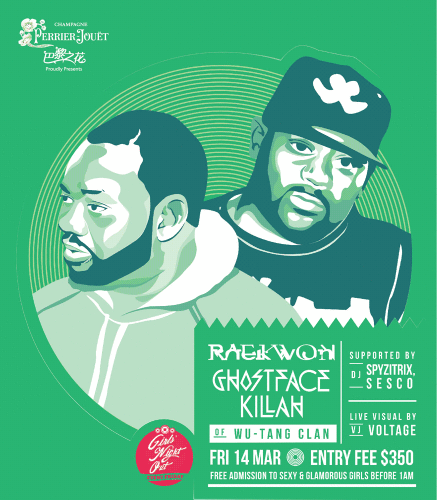 Raekwon and Ghostface Killah, prominent members of Hip Hop supergroup, Wu-Tang Clan, will be performing at club Cubic, Macau, on Friday, March 14th. For fans of authentic New York Hip Hop, this is perhaps the biggest show of the year!

In addition to their work with the legendary Wu-Tang Clan, Raekwon and Ghostface Killah have both had successful solo careers of their own. Over the last twenty years they have collaborated on a long list of street classics and hits.

The two Staten Island M.C.s have unique rhyming styles that have made them well respected among rap purists. Even at their most approachable, both of the two have a street edge that never softens.

Similarly, their use of slang is a throw back to the days when rap was just a New York-only phenomenon.

As Hip Hop became more widely accepted, Raekwon and Ghost Face continued to stay true to their New York roots and never dumbed down their sound to pander to mainstream audiences. Even their slow song with Jodeci sounded tough!

Raekwon and Ghostface have too many notable songs to list, but a few standouts include: Can It Be All So Simple (with Wu-Tang;) Verbal Intercourse (with Nas); Ghost Showers, The Splash, Meth vs Chef, 260, Cherchez La Ghost, Save Me Dear, The New Wu, Missing Watch, 9 Mili Bros, and Rock Steady.

Raekwon’s style of rhyming with short streams of words and staccato delivery makes him a true original in Hip Hop.

Ghostface is likewise incredibly agile, and himself a music lover, who can be backed by anything from smooth Soul and Disco beats, to even Dawn Penn’s Reggae classic “No, No, No.” His technique of rhyming directly on top of songs – their singing intact – is something altogether different.

Can It Be All So Simple

Raekwon and Ghostface will be joined by Hong Kong’s party rap crew, 24HERBS on the 14th. Check our our earlier post for a quick background on Hong Kong’s Hip Hop scene.

In the past, Cubic has booked a number of major Hip Hop stars ranging from mainstream acts such as Flo Rida (who gave an amazing performance at Cubic’s opening,) to Mos Def, who performed a special set on Christmas Eve, 2012. The large stage makes it one of the best clubs in the region to catch a live performance.

Coming up for Cubic’s third anniversary, on Saturday, April 5th, they continue this tradition by hosting another big name rapper – Ludacris, who will headline their birthday celebration. Stay tuned for more details!