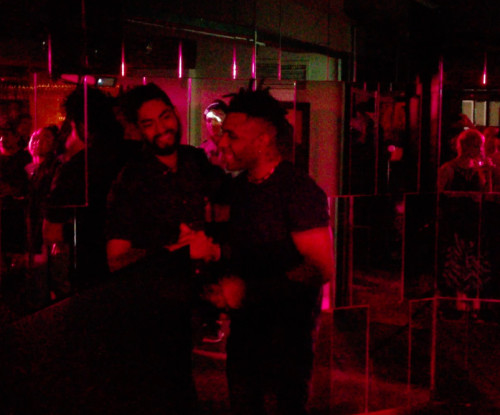 Local promoters F.O.B. have turned things up a notch in the city’s nightlife over the past year and they are celebrating their anniversary with a huge lineup this Saturday at W Hotel. The party starts at 6pm and finishes at 6am, for twelve hours of non-stop music.

Over the year they put together an ambitious schedule covering multiple genres and including major names such as J. Rocc, Mark de Clive-Lowe, Omar (pictured above with Zaran from F.O.B.), Justin Martin, Peanut Butter Wolf, Nosaj Thing, and many more.

Saturday’s celebration includes twelve favorites who play a variety of quality, underground dance music. This won’t be boring mainstream music that you hear at every commercial place in Lan Kwai Fong, but eclectic, indie dance music for more sophisticated tastes.

F.O.B. has filled up the pages of Hong Kong Hustle by bringing top quality acts to the city and we wish them a happy anniversary and continued success! Congratulations to Zaran, Mark and the entire F.O.B. crew – you’ve made a difference!

On Saturday night you can expect an enthusiastic crowd into dancing and having fun!

Tickets are available from the F.O.B. EventBrite page. Tickets are $200 HKD advance, or $250 at the door.

F.O.B. aren’t taking a break after their anniversary either. On April 25th they are bringing the talented Miss Dynamite.

Tags from the story
f.o.b., fresh off the boat, zaran