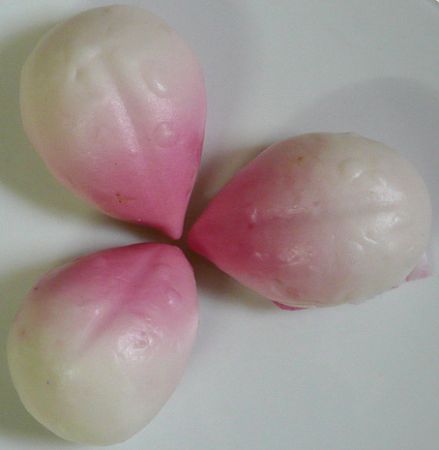 The end of a traditional birthday celebration isn’t complete without a basket of birthday buns! Pronounced ‘sau bao‘ in Cantonese, (sounds the same as Sao in Sao Paulo,) the dessert is a colorful treat that never ceases to impress.

Like other buns, these are steamed and served in a wooden basket. On the bottom they have a thin layer of paper, which you should remove before eating!

The buns resemble a peach which is a symbol of longevity. They mimic the fruit in several ways. First in shape, by adding a slight curvature or thin spine along the outside of the bun. The coloring looks like a white peach and includes a light dusting of pinkish-red on the outside to make the illusion complete. They are usually remarkably well done!

The interior of the bun is filled with lotus seed paste, which is found in other traditional Chinese desserts.

You can spot them at local bakeries specializing in Chinese delicacies or order them at certain Chinese restaurants to complete a classic birthday banquet.

The taste of the bun is mild and sweet, but their look and consistency make them a fun favorite.