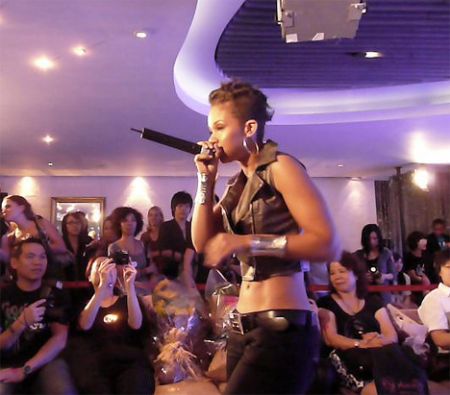 Last month’s Annie Who fashion show featured the human beat box Butterscotch as the night’s entertainment. A quick definition of a human beat box is someone who uses their mouth as a musical instrument. Beat boxes emerged during the early days of Hip Hop music and have remained something of a novelty.

Butterscotch gained mainstream notoriety a few years ago after performing on the TV show “America’s Got Talent.” I happened to be in a good spot during her recent Hong Kong appearance and captured it. But while watching the performance, something about her routine seemed oddly familiar.

In its first decade, Hip Hop music was all about creativity. People strove to invent new routines and the music was exciting as it constantly evolved. Originality was key in differentiating yourself and being successful.

Being unique was so highly prized in those days that people who copied an individual’s style were looked down upon and called ‘biters’. No one would dare do the same routine as another artist.

During Butterscotch’s performance, she launched into a routine that included a rendition of Donna Summer’s hit “Love to Love You Baby”. This immediately struck me as strange since on a previous occasion years ago, beat box Killa Kela also performed the same song in Hong Kong.

Beatbox Killa Kela in a show from 2006

There are so few beat boxers out there who achieve mainstream success (and large public performances,) that it’s bizarre to have them performing the same song. They must know of each others routines through competitions, DVDs and Youtube.

Human beat boxers are still a novelty for most people, and it’s bad show business that two of the more visible ones would go over the same material. Hearing the same song repeated by two different artists detracts from the wow factor of the performance. It comes across as unoriginal. Perhaps it was just a coincidence and they both developed a routine around Donna Summer’s “Love to Love You Baby,” but there are endless songs out there and one of them should have the smarts and versatility to perform something new.