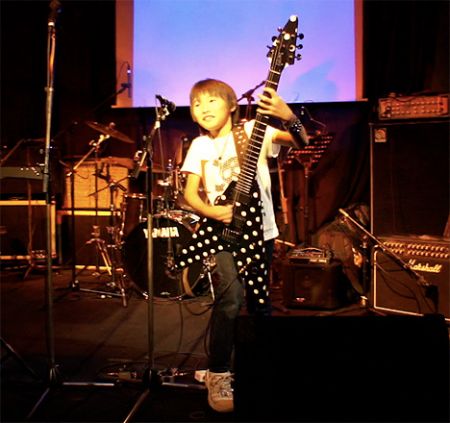 Guests gathered together for a special Rock concert to benefit Operation Smile on October 8th, were treated to two songs by guitar prodigy / Heavy Metal head-banger Yuto Miyazawa. This is the ten-year-old kid from Japan who tours with Ozzy Osbourne!

Check out the video of Yuto playing “Crazy Train”!

Yuto kicked off what was a fun night of mostly amateur bands made up of Hong Kong personalities. Among the performers were the new band Donner Und Blitzen, Absolute Crap, Uranus, and Detroit Diamond.

Aside from the concert, the event featured several auctions which helped to raise additional funds and awareness. An anonymous bidder bought a signed guitar for $500,000 HKD, which helped bring the amount raised from the one-night event to nearly $1,000,000 HKD.

In contrast to many of the other charities out there, Operation Smile has a very immediate effect and direct benefit on children’s lives. The charity focuses on a single thing – performing operations on children born with a cleft lip. The facial deformity is surprisingly common in China. Without an operation, children’s lives are altered severely.

A single operation can fix it, and Operation Smile raises funds and organizes trips for specialists to perform missions in China and around the world. It’s direct, transparent, and has immediate results.

For more information about this worthy cause, please check out the Hong Kong website of Operation Smile.