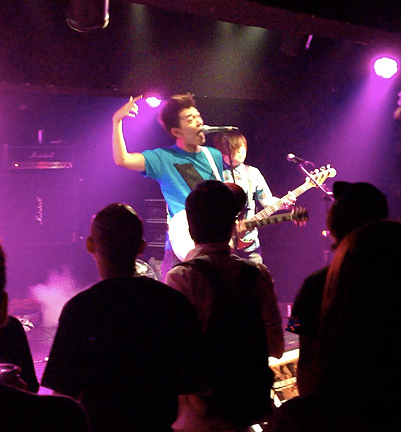 Saturday night, Vans hosted a screening of the recent documentary No Room For Rockstars. The film was followed by a performance by local band Hardpack, who began their set with a cover of the Beastie Boy’s hit “Sabotage” in honor of MCA’s death last week.

Here’s the beginning of Hardpack’s cover of Sabotage:

No Room For Rockstars gives a behind-the-scenes look at The Warped Tour, an American concert series. The documentary details the struggle, and not-so-glamorous life, of months on the road performing music.

The venue for the screening and band show was the newly relocated Hidden Agenda. The space, which contains a largish open area and a simple stage, is one of the only venues in the city dedicated to live music.

Housed in the former factory district of Ngau Tau Kok, it is indeed hidden!

Getting to Hidden Agenda isn’t actually that difficult. It’s about a five block walk from Ngau Tau Kok MTR station exit B6.

The entrance looks exactly as you would imagine, a warehouse with a small metal gate that’s open after-hours.

Vans did a great job decorating the space for the screening. There were posters everywhere.

The event was well attended, with faces from the band scene mingling together with artists and other indie cliques.

Vans No Room For Rockstars is definitely worth a look and it’s currently at the top of the iTunes documentaries chart.

If you miss checking out live indie bands in a gritty no-frills setting, Hidden Agenda is worth the trip. Have a look at their site and see who’s performing next!