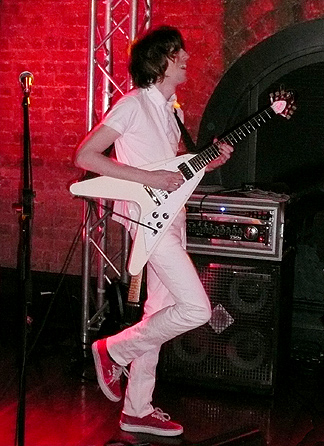 O.k., so the band’s real name is Housse De Racket, but you could have easily been mistaken after catching their live show on Sunday night. Brought in to perform at the after party for the new A.P.C. store in Central, Housse De Racket put on a memorable, rocking performance.

How many members are there in the band?

With just two members – one on drums, and the other on a combination of guitar and keyboard, the duo paraded through a strong set of upbeat, catchy songs.

Each track was brought to life with powerful, fast drumming and charismatic guitar playing. Fans of contemporary French Rock will immediately get the Housse De Racket sound.

The band was introduced by the founder of A.P.C., Jean Touitou, who himself is a major music fan. With just their debut album out, Housse De Racket are definitely on the rise. A.P.C. / I.T is to be commended for bringing over the band and exposing Hong Kong to something fresh and fun.

The pair from Paris both sang throughout the show, but it was their instrumentals that shook the crowd out of their Sunday lull.

With a warm, down-to-earth performance style, Housse de Racket were engaging and the crowd screamed for an encore.

The guests were moving more than usual (though probably not as much as Housse de Racket are used to!)

For a taste of the night’s vibe, have a look at Housse De Racket performing live (elsewhere).

The second floor of the F.C.C. (located in the same building as The Fringe Club,) is an interesting venue with a high beamed ceiling and brick walls. The space has a warm feel which was perfect for the intimate live show.

The A.P.C. store adds yet another partnership to fashion retailer I.T.’s shopping empire in Central. If you picture the intersection of Wyndham Street and On Lan Street like a game of Monopoly, I.T. owns most of the property!

Their collection of partners include big names such as Visvim, Comme des Garcons, Martin Margiela, Neighborhood, Junya Watanabe and A.P.C., to name just a few. Piece by piece, I.T. has created a fun, boutique-filled shopping destination that balances convenience with a historical urban setting. (This is a unique strategy that relates to my previous post about flagship stores.)

An hour before the concert began, there was a small event at the A.P.C. store on Wyndham Street. The shop featured French d.j. Koko von Napoo spinning to celebrity shoppers.

The store is a perfect match for the clothing – simple, well designed, and minimalist.