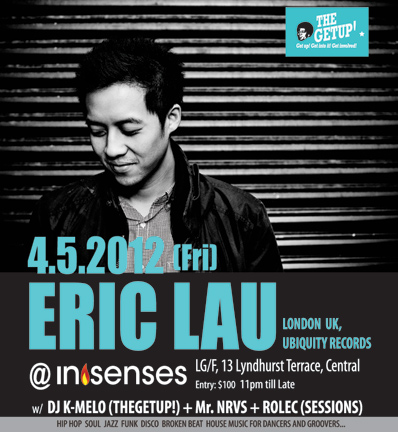 Around six months ago I was bored with my usual nightlife routine and happened to take a chance, heading over to a venue I don’t normally go.

Descending down a flight of stairs I was greeted by a small bar, a dimly lit space, and one of the best dj sets I’ve heard in years! The party was The Getup, and the dj, visiting from London, was Eric Lau.

Looking around the room, not a single person in the venue was fiddling with their phone, or standing around a table apathetically. Instead, everyone in the cozy club was dancing and having fun.

The cover charge was a mere $100 HKD, and for that I was treated to several hours of amazing songs, spanning everything from Soul, Disco, Jazz, and Hip-Hop, to Broken Beat, and House.

Though I didn’t know anything about Eric Lau at the time, the music spoke for itself! He didn’t jump up and down or high-five the crowd, instead, his music was all he needed to get people moving.

I was wowed enough to do some research when I got home.

In addition to being a talented dj, Eric Lau is also an accomplished producer, with several releases under his belt on London’s Ubiquity Records.

As a producer he has collaborated with heavyweights such as Lupe Fiasco, Georgia Anne Muldrow, Chris ‘Daddy’ Dave, Dudley Perkins, Guilty Simpson, Oddisee, Muhsinah, and Tanya Morgan. As a dj he has performed on tour with acts like Erykah Badu and Questlove from The Roots.

Back for his second appearance in Hong Kong, Eric Lau will be manning the turntables at Insenses once again on Friday, May 4th.

You could easily pay three times the price and hear boring mainstream music all night, OR you could try something new, support a rising talent, and actually have a fun time.