Like DJ Spooky, DJ Shadow is one of those guys who has an unbeatable, iconic DJ name. In addition to the cool handle, he’s also got the talent and originality to make it mean something.

In addition to his original productions, DJ Shadow is appreciated as well for his sophisticated sound collages that tap his extensive music library. He personally owns a collection of more than 60,000 vinyl records!

This Thursday, August 9th, you can catch him in a rare appearance at Volar. (Details below) 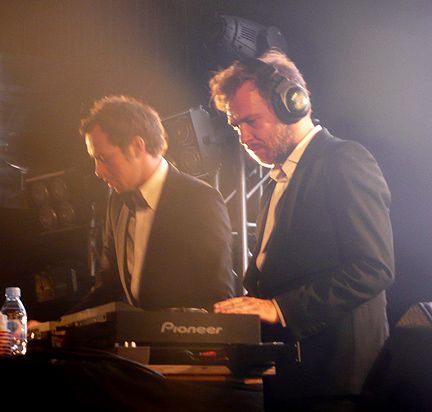 The two brothers, otherwise known as David and Stephen Dewaele, like DJ Shadow, are also fanatical music lovers and collectors. In fact, during every visit to Hong Kong they descend on local junk stores looking for old records.

2manydjs have a different way of approaching music than many of their contemporaries. Operating also under the Soulwax moniker, they put on several different types of shows, including some that integrate video in a unique way. Their sets are super-charged adventures that combine new twists on familiar classics and often result in party-rocking mixes that covers multiple genres.

Both versatile DJs, 2manydjs can play a small intimate gig, or headline a massive room, as they did at their now legendary performance in Macau a few years ago.

Both DJ Shadow on Thursday, and 2manydjs on Saturday are recommended!