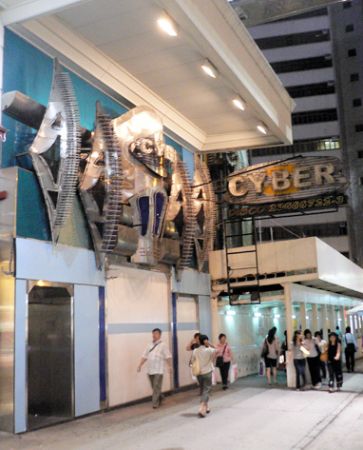 Cyber 8 Disco, commonly referred to as Cyber, officially closed its doors at the beginning of the month. Located near the bottom of Nathan Road in Tsim Sha Tsui, it was one of Kowloon’s most infamous discos.

What is a Hong Kong Disco?

A Hong Kong disco is made up of the following ingredients: a cavernous space with a weird theme; a huge dance floor; a large section of private karaoke rooms; a booming sound system; several bars, and an over abundance of disorienting lights.

Depending on your preference, the music found in local discos is either heaven or hell. Traditionally the mainstay was drum-heavy remixes of Cantopop songs – the same throbbing beat you hear pumping from delivery trucks driving around the city. When rave parties became popular, trance music was integrated into the mix. As Hip Hop / R&B became mainstream, it too became part of the repertoire. On a typical night, the d.js. now blend all three genres.

Discos are located mostly on Kowloon-side. Compared to Central’s more upscale clubs, the size of the spaces and quantities of people are enormous. Cyber claimed to be the largest disco of them all. The layout featured several bars, dozens of tables, private karaoke rooms, and a large space for dancing. The decor was based on Hong Kong’s infatuation with the word ‘cyber’ from the Internet boom in the late 90’s. Lots of shiny metal adorned the entrance and passageways throughout the club.

Discos in Hong Kong are typically associated with two things: drugs and gangs. Cyber had both of those, but there were also a few positives. For one thing, the lighting system was excellent, better than anything you can find in Hong Kong’s more haughty clubs. Check out the following video for a look at the scene!

The crowd at discos is predominantly young, somewhat lower class locals. The legal drinking age is eighteen in Hong Kong and discos are far less discriminating about turning people away. It’s not uncommon for discos to be crowded every night of the week. The places stay open later than six am. People are there purely to party, not just to be seen, which makes it a fun atmosphere… until someone throws up on you! It’s a stark contrast to Central’s more high-end nightlife where people tend to be more reserved.

Over the years Cyber disco had one too many run-ins with the police who were anxious to see it close. On the whole, huge, over-sized discos seem to be on the way out. Club Hot and 348 (now known as F1,) are two other top discos. Due to several high-profile cases involving drugs, and recurring problems with gang activity, more discos are rumored to be closing. Local developers are probably eyeing the spaces to convert into mini-shopping malls, which appear to be making a comeback around the city.

So how does this effect the party scene in Central? The police have been concerned that the former disco crowd will soon descend on Central’s nightlife areas since Tsim Sha Tsui has dried up. With several new large-scale clubs set to open, they may be right.

Below is a photo of Cyber Disco while it was still open: 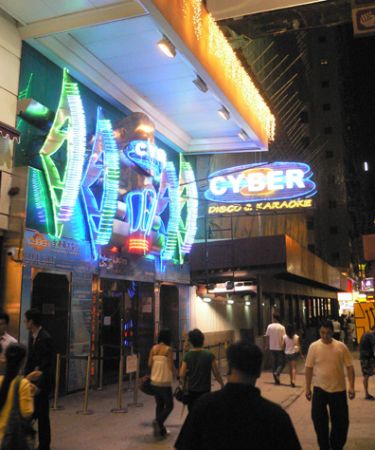