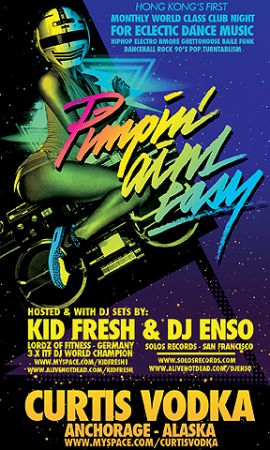 Cliq, the new kid on the block has joined Hong Kong’s top nightclubs in becoming a force for bringing talent to the city. This Saturday features human beatbox Verbal Ase followed by new-school d.j. / remixer Curtis Vodka on July 25th.

Open for less than a year, club Cliq has featured a diverse lineup covering multiple genres of dance music. Visiting acts have come from the realms of electro, Techno and Hip Hop. Some of the featured names include: M.A.N.D.Y., Christopher Dennis, Derrick May and Jin tha M.C..

Interested in hearing a sample of Verbal Ase or Curtis Vodka?

This Saturday features a performance by human beatbox phenomenon Verbal Ase. In the past, Hong Kong crowds have been thrilled by human beatbox shows. Acclaimed beatboxer Killer Keller has visited the city twice and received standing ovations! Videos of Las Vegas native Verbal Ase are all over YouTube. He definitely has a flair for presentation and showmanship! For a preview, check out the clip below that starts off with a spooky tribute to the Japanese horror film The Grudge!

Part of d.j. / remixer Curtis Vodka’s selling point is that he’s from Alaska! (Now that’s cool!) Curtis Vodka has lent his talents to various new music sensations including Uffie. You can check out his Eurythmics-inspired remix of her song “Pop the Glock” below.

Cliq joins Dragon-i and Volar in offering premium musical talent. Clubs jockeying for popularity are eager to showcase top name entertainers. Visiting foreign talents are the brand names used to enhance the hip-ness and status of a particular club.

One trait that Cliq has to its advantage over the other venues is a superior dancefloor. The club is divided into two rooms, each boasting a large dance space. Combined with ample seating space, Cliq is a well designed club. Another difference is that guests are much less likely to get the members-only vibe at Cliq when they come off the street to catch an act.

The performance on the 25th takes place during Cliq’s monthly “Pimpin’ Ain’t Easy” night that champions all varieties of new dance music. The event is hosted by D.J.s Kid Fresh and Enso. On the 25th, D.J. Miss Yellow will be playing a special Electro / Big Beat set to close out the night.

Cliq address:
2/F On Hing Building
On Hing Terrace
Central, Hong Kong (across from M-88 on the corner of Wellington and Wyndham Street.)