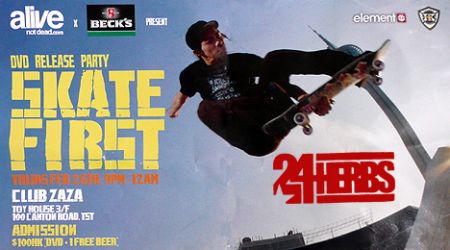 One reason I’ve always been into skateboarding is that there are no rules. Hit the street and you can spend hours doing anything you want. Being a skater in urban terrain in particular, forces you to be creative. You’ve got to seek out spots (or objects) to try out your moves.

Part of the fun is building a vocabulary of tricks. From a few basic moves you can create a nearly endless string of variations.

This Thursday, February 26th, is the release party for Skate First, a new DVD directed by local skater and indie filmmaker, Nigel Ong. Skate First is a series of introductory lessons that also includes footage of Hong Kong and international pros doing amazing tricks against the city’s concrete landscape.

Don’t believe me? Have a look at the trailer for the DVD, plus find out which celebrities are skaters!

Several well known Hong Kong entertainment figures are skaters. Daniel Wu, Sam Lee, Conroy Chan and Ryan Hui have all been into skating for years. 24 Herbs band member Brian is also part of Hong Kong’s skate community and is the owner of 852 skateshop in Causeway Bay.

Alive Not Dead is at it again!

The Skate First launch party is another example of the strength and diversity of the Alive Not Dead network. Thursday’s event is organized by the fast-growing social network and employs the same formula as their previous CD launch parties for bands.

Guests pay just $100 HKD, and receive a copy of the new DVD, plus get a free Beck’s beer, and admission to the party featuring a live performance by 24 Herbs! Dance crew Beatrix will also be giving a showcase. Throughout the night, Element Skateboards will be giving away an assortment of prizes.

(For those who can’t make it, the Skate First DVD is available at all HMV stores in Hong Kong.)