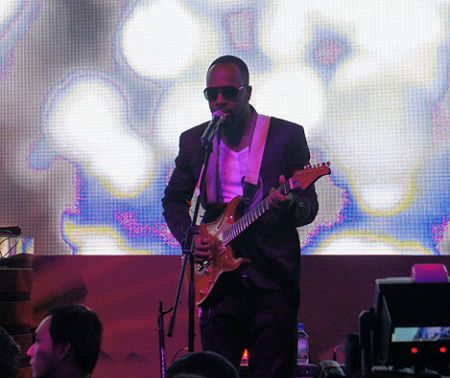 Well known performer and one-time Haitian presidential hopeful, Wyclef Jean rocked the crowd at the Duty Free Shops 50th anniversary on Saturday night. Starting off playing guitar and singing, Wyclef got the crowd moving from the moment he stepped on stage.

The ex-Fugee, ever the showman, at one point climbed up into the rafters and started hyping up the crowd. Check out the video!

There were rumors before the event that the Black Eyed Peas were going to play, followed by talk that Lauren Hill might perform. Though neither was the case, Wyclef Jean played a set that was a good fit for the older crowd, starting off with music that was both catchy and familiar.

Later, Wyclef went through a medley of Fugees hits, before launching into a mix of party classics that included Nirvana and Queen. The well-dressed, middle-aged crowd was in a good mood and gladly participated the entire time. (Even when he asked people from ages 80 to 100 to “make some noise!”) 😉

Unfortunately, once Wyclef Jean’s performance was over, there wasn’t a d.j. to step in and keep the momentum going. The crowd, somewhat entranced by the peculiar venue, milled about contently, despite the lack of music. That there wasn’t a mass exodus must be a testament to the unique circular space and the multiple open bars.

The venue was a specially built dome on the site of the former Kai Tak airport. The interesting bit of history here is that the very first Duty Free Shoppers store was located in Kai Tak!

As we’ve seen before with mega-events by Louis Vuitton and Coach, the entire structure was bathed in branded graphics projected onto the surface.

One standout that most guests commented on was the extremely sharp high-definition screen that provided the backdrop to the stage. During camera close-ups you could literally see the sweat beading on people’s faces!

Though the night never reached the frenzied climax of previous mega-events, the guests clearly enjoyed the intimate performance by Wyclef and reacted well to the unique venue.

Congratulations to DFS on their 50th anniversary!