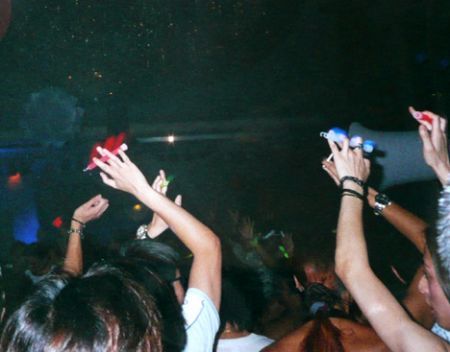 Get ready to be transported back to a time of smart drinks and smoke machines! Friday’s installment of the monthly Pimpin’ Ain’t Easy party features two d.j.s with new mixes out that are heavily influenced by the early 90’s rave sound.

Not familiar with D.J. Drafus? Perhaps you know him by one of his many d.j. pseudonyms!

Drafus is a pioneer in bringing contemporary dance music to Hong Kong’s top clubs. He’s created multiple nights and is currently known as one half of Disco Stepchild, half of Sh*t Sandwich (he’s the filling, not the bread), and one third of Uptown Rockers.

Drafus is a trend-setter in Hong Kong’s music and fashion circles. It’s not that people directly copy him, it’s just that he’s always a good year or two ahead of everyone else (which sometimes leaves him open to ridicule from his friends!)

Drafus has championed contemporary dance music in Hong Kong for over eight years, and was the first to break many new genres including Electro, way before it became a mainstay of the city’s clubs.

Starting off at places such as Chapter 3 and Yumla, he also kicked off the infamous Tuesday nights at Dragon-i. Drafus now DJs his own special party nights at Volar and Racks.

Hong Kong is finally catching up. The Pimpin’ Ain’t Easy party, started last year by DJs Kid Fresh and Enso is focused in a similar direction. Every month they bring cutting-edge dance music d.j.s from around the world to Hong Kong. Having Drafus play is a natural fit.

This month the party has moved down to Club Cixi, which is located in the same building as the former location at Cliq. (Cixi is on the ground floor.)

To hear a recent mix by DJ Drafus go here: here. Visit DJ P.O.L. Style’s MySpace page for a link to his podcast.

Friday night’s event should be a feast of new dance music mixed with familiar sounds from the golden age of raves.