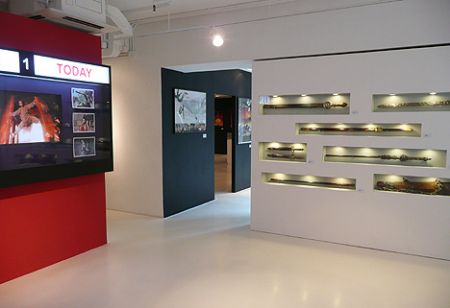 It’s difficult to overstate the importance of Tsui Hark’s Film Workshop to Hong Kong cinema in the mid 80’s thru 90’s. The company epitomized the magic and versatility of Hong Kong filmmaking. A list of their productions reads like a list of the best Hong Kong movies of all time.

To commemorate the 25th anniversary of Film Workshop, (a company formed by director Tsui Hark and his wife, the producer Nansun Shi,) the Hong Kong International Film Festival is curating a special exhibition at the Agnes B. gallery in Wanchai.

Located up a set of stairs on Wing Fung Street, next to Pacific Place Three, the show consists of posters and props from Film Workshop’s movies. Glancing at the posters, you begin to understand just how many important works were born from the company.

Absolute classics including Shanghai Blues (a personal favorite!) Peking Opera Blues, A Better Tomorrow, A Chinese Ghost Story, Once Upon A Time in China, The Killer, Iron Monkey, Swordsman and Green Snake all bore the Film Workshop touch.

Props, including specially hand-crafted weapons from the movie Seven Swords were also on display.

Interspersed are drawings, or studies of scenes that were to be shot for different films. A video containing interviews and clips from Tsui Hark’s movies is also on rotation. A bank of CD players allows visitors to hear film soundtracks, many of which contain hugely recognizable hits.

For a company as prolific as Film Workshop, the exhibition isn’t very in-depth. Compared to massive exhibitions staged in previous years, such as the collection of artifacts from the director King Hu, the Film Workshop exhibit is a little light, with an emphasis on his most recent work. Perhaps this is because it’s a struggle to locate and get the rights to artifacts.

Movie fans will still find the show a treat, especially the experience of standing in a room surrounded by posters from so many legendary films.