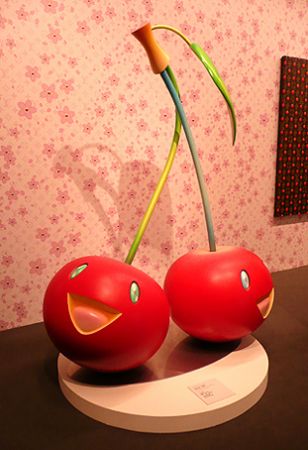 Here at Hong Kong Hustle we’ve previously discussed the fact that luxury brands are the new patrons of the arts. In the recently opened exhibition, “Louis Vuitton: a Passion for Creation,” the well known brand has created an exhibition worthy of its prominent name.

The large, multi-gallery show provides a rare glimpse at works from revered contemporary artists including Jean-Michel Basquait, Jeff Koons, Richard Prince, and Takashi Murakami, to name just a few. This is an opportunity that doesn’t frequently present itself in Hong Kong.

The exhibition is larger than I expected and is broken up into several sections. Marc Jacobs, who was once artistic director of Louis Vuitton, is credited with spearheading the brand’s collaborations with contemporary artists. This was a wise move – Takashi Murakami’s designs for Louis Vuitton alone sold over $300 million U.S. dollars worth of merchandise!

Collaborating with artistic big guns such as Stephen Sprouse and the others has yielded impressive results. Who better to enlist than those with a brilliant understanding of colors, patterns and forms? Together they have pushed the envelope, furnishing the venerable brand with fresh, sought-after designs season after season.

Walking through the exhibition takes time. There is a large segment of film and video work in addition to paintings, sculptures and installations. In some cases, the featured artists have collaborated directly with Louis Vuitton, while others are included for their notable creative vision. What follows are a few of the highlights.

Andreas Gursky’s room containing photos of Formula One pit stop crews at work is both technically fascinating as well as intriguing. The photos feature an almost classical composition reminiscent of “The Adoration of the Magi.” The series is titled F1 Boxenstopp from 2007.

There are several complex works by Jean-Michel Basquiat included in the exhibition.

The pieces are rich in historical and pop culture references, as well as the artist’s play on words.

Takashi Murakami’s portion of the exhibit takes up an entire large room. Though some traditional art enthusiasts have had trouble understanding his often consumer-friendly creations, the artistic merits are clearly apparent throughout the gallery. Here we find not only smart reinterpretations on canvas (that play with signature Louis Vuitton patterns,) but also sculptures and video work. For more background information about Murakami, check out this lengthy article from the New York Times Sunday Magazine.

Stephen Sprouse also has a major section devoted to his work. Even if you’re not familiar with his name, the Louis Vuitton bags bearing his touch will surely jar your memory. Sprouse, a fashion star of the eighties who utilized a unique punk / graffiti style, collaborated with Louis Vuitton for several successful seasons. It’s interesting to see the greater depth of his work here.

In a city crowded with neon lights, Bertrand Lavier’s Empress of India II is still interesting to behold.

The grand scale and multiple rooms of the Hong Kong Museum of Art match the exhibition well. Perhaps there is no other location in the city that can support a major show of this scale. Works of this caliber deserve the space and dignity of this kind of environment. In order to fully appreciate certain pieces one needs to be able to step back and gain perspective of the work. Hong Kong’s land prices make for cramped galleries that resemble convenience stores more than international showcases for art. It denigrates the work to be shown in a closet-sized space, or a jumbled setting.

The exhibition is slightly reminiscent of last year’s Chanel Mobile Art, though in that case, the clear star was Zaha Hadid’s building. In the architectural department, Frank Gehry represents the brand’s designer of choice. Part of the exhibition features a large model of the Louis Vuitton Foundation building – designed by the futuristic Gehry. There are also videos and books by the architect on display.

The collection of work by local artists was mixed. Standouts included the subtle but smart installation of window bars common to Hong Kong apartments. Another work that caught my attention was an interesting installation in orange and brown tones.

After about two hours I started to get hungry and had to leave certain elements of the show unexplored. For example, I didn’t take in the full video offerings, but was impressed enough by some of the video shorts / installations that I’m planning another visit. (The most impressive so far: a complex piece composed of gun-fighting sequences; a short work about a skull; and a small TV with scenes of flocking birds.)

The Hong Kong Museum of art itself became part of the exhibit as it was wrapped in art by Richard Prince.

The graphics use cover art from pulp fiction paperbacks. This type of artwork was meant to titillate the passerby and entice them into purchasing the book. Promising exotic locations and wild tales, the books were often serials. This one is notably titled “Hong Kong After Dark.” Let’s hope it draws more people to the exhibition!

Don’t be one of those people who waits and waits and then misses the show – as some of you did for Chanel Mobile Art or the Vivienne Westwood retrospective! When it comes to art, Hong Kong is improving remarkably fast. Let’s keep the momentum going!

Louis Vuiton: A Passion For Creation
Hong Kong Museum of Art
10 Salisbury Road
(just next to the Cultural Centre and Avenue of the Stars)
Tsim Sha Tsui

From now until August 9th
$30HKD adult price
Closed on Thursdays (except public holidays)
Open every day from 10am until 6pm, and 8pm on Saturdays