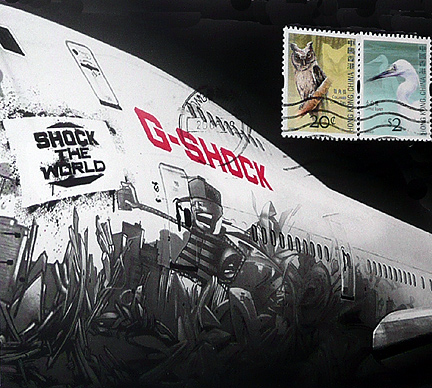 A party for Casio G-SHOCK watches? It’s not as unusual as it sounds. In fact, in Hong Kong, mega-events for watch brands are common.

What makes this one different?

In Hong Kong, watches are thought of both as an important fashion accessory and also as a collectible. Worn as an accessory, a special watch can show your personality and wealth – a contributing factor to gaining “face.” As a collectible, watches take up relatively little room, which is important in Hong Kong’s space-challenged apartments.

Despite the fact that mobile phone penetration here is near 100%, and you can tell the time from your phone, you find both men and women fanatical about watches.

Hong Kong is a strong market. Perhaps due to the affluence of local consumers, most of the famous watch manufactures have a presence here. Lavish events are held by brands such as Panerai and Franck Muller to unveil new models and build awareness.

Although aimed at a different demographic, Friday night’s Shock the World Tour by G-SHOCK, serves a similar purpose.

In order to match the younger, trendier target group, G-SHOCK has commissioned collaborations with local band 24 Herbs, as well as with clothing company, Sub Crew to create limited edition items. Things like this are important for promotional purposes and generate buzz in local fashion magazines.

The Shock the World Tour is being replicated in twelve cities around the world. The Hong Kong party is being held at club Cliq and features a wide variety of performers. The lineup includes Japanese producer / d.j., Yasutaka Nakata; 24 Herbs; DJ Becareful (aka Sam Lee;) and Quan – the solo artist formerly of the Australian group Regurgitator.

In order to appeal to a wide youth audience, the musical choices cover a lot of ground. 24 Herbs are sort of a party rap / Beastie Boys type of group. DJ Becareful plays fast-paced new dance music and is the head of Sub Crew. From what I can tell, Yasutaka Nakata plays upbeat Electronic House and is a popular remixer. Weirdest of them all, but perhaps the one I’m most curious about is Quan. Searching for more information about him I discovered that he did the 80’s inspired song from my friend’s zombie movie, “Isle Be Damned.” Another video I found by Quan can only be described as sort of a Justin Timberlake inspired serial killer R&B song! Interesting stuff!

*Friday night’s event is invitation only from 9 until 11pm. Afterwards I believe it’s open to the public, but with a cover charge.