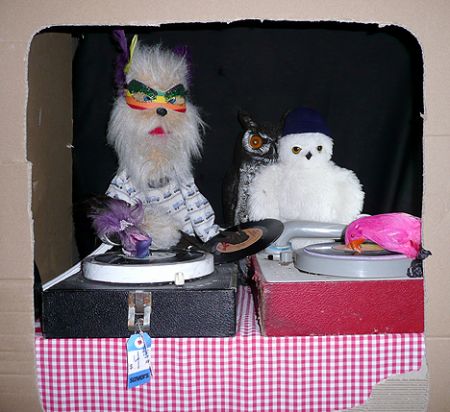 Hoo’s in the house?

Texas-based artist Matthew Bonifacio Rodriguez headlines a new show at the nomadic Apostrophe gallery. The exhibition, a group show titled CCTV, is being held in an abandoned office space high above Central.

Looking over his work I started to wonder – is there such a thing as a thrift store aesthetic?

The art of Matthew Rodriguez is filled with nostalgic children’s Americana. The images borrow much from the past, and contain references to childhood and children’s books.

Not only are their actual old toys used in his work, but he also integrates vintage illustrations. In one work he even drops the name of ‘Lite Brite‘ (a famous game from the 70’s,) into his painting.

Matthew Rodriguez’s diorama near the entrance of the show takes this thrift-store style one step further. In a large cardboard box he assembled stuffed animals (a dog and two owls,) in a hipster d.j. scene.

A pink parrot is even posed using its beak as a stylus to play a record! The fact that a $4 price tag remains in place, dangling off of the vintage record player, establishes this as an unrepentant thrift store find.

There is definitely a charm and allure to thrift store merchandise. Sometimes on the shelves one can find pieces that exemplify the mood of a bygone era. Whether it be an object molded in a 1960’s version of the future, or a worn out record with an interesting cover, there’s something genuine and authentic about the items.

Integrating them into his work, Rodriguez adds a seasoning that conjures up a certain mood based on the period of the object.

Several works make use of fabric in creating three-dimensional collages. The works are more impressive in person due to a visual trait that’s not apparent in photos.

Text appears in the works similar to the way narrations are used in children’s books.

Other artists in the show include fellow Americans, Doodles and Claudius Phaedrus, as well as DEM and Geometric Bang from Italy.