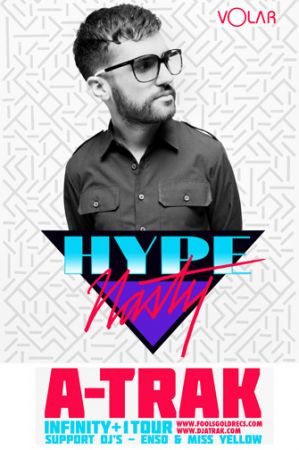 DJ A-Trak headlines the new Hype Nasty party at Volar this Thursday, May 21st. Hype Nasty is organized by the same people behind Pimpin’ Ain’t Easy.

In the sea of d.j.s playing multiple genres of dance music, there are a few clear standouts and A-Trak is one of them. A former world champion turntablist, A-Trak has always been a step ahead of other d.j.s.. While some turntablists are technically creative, A-Trak has that rare combination of being both musically and technically gifted.

A-Trak’s approached music in a very open way and integrated multiple genres into his repertoire before it became trendy. His foresight has paid off, landing him the title of Kanye West’s d.j., as well as personal collaborations with many of today’s top dance music acts including Digitalism, MSTRKRFT and Boys Noize.

When it comes to catching a d.j. in a club, top turntablist skills mixed with good music sense are a deadly combination! This is one performance not to be missed!

For the night, A-Trak will be supported by D.J. Enso and Miss Yellow.

The following night A-Trak will also be performing at Cubic in Macau.