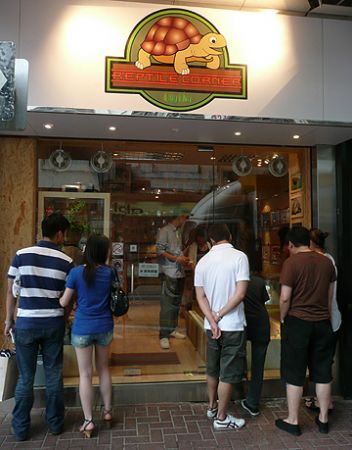 I was walking along Cannon Street in Causeway Bay (known for pet stores and Vietnamese restaurants,) when I spotted a new shop. There was a small crowd gathered out front peering through the windows. What was the attraction?

If you looked closely in the first window there was a chameleon semi-camouflaged, blending in with the fake leaves in its enclosure.

In the second window there were three large lizards slithering around on the ground as a female staff member attended to them. A few medium-sized turtles were also in the mix.

No, wise-guy, this wasn’t the opening of an exotic burger joint! The shop, Reptile Corner, is a clear standout among the other pet stores in the neighborhood.

I’m not sure why, but certain people find reptiles irresistible as pets. Perhaps it has something to do with our love of dinosaurs?

It’s not just guys buying reptiles either. There seems to be equal interest from both men and women. A girl I know used to have a large lizard and would take it on outings to Repulse Bay beach! (I wouldn’t want to be the one laying there when that thing slithered up!)

There was enough action in the front window alone to keep me outside on the pavement. I didn’t go in for a closer look, so I’m not sure whether their stock also includes snakes, another reptile.

Have an idea why people like reptiles as pets? Add your thoughts in the comments!

[photopress:Snake_girl_Hong_Kong.jpg,full,pp_image] Can we all just get along?