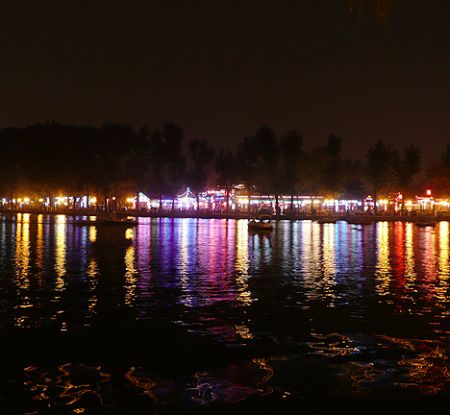 It’s hard not to be impressed with Beijing. Every time I visit I’m struck by something new. Usually it has to do with the grand scale of the city.

Imagine nearly any place in Hong Kong and there’s an equivalent in Beijing but super-sized! Markets, shopping malls, computer centers, everything we know and love, they have them too, but built on an almost mind-boggling scale.

To be fair, you can’t really compare the two cities by size. Hong Kong and Beijing are almost total topographic opposites. Beijing is flat with a surplus of land, while Hong Kong is so land-scarce and mountainous, that it needs to reclaim part of the harbor every once in a while just to make additions!

This trip to Beijing was a brief one. I only had a few hours on Thursday night and a few more on Friday to explore. The weather in Beijing was much different from my previous visits. Clear, dry and moderate, I couldn’t imagine better conditions to meander around the vast city.

Setting off at night, I decided my destination would be Houhai. Houhai consists of an area that includes three lakes with hundreds of bars, restaurants, and cafes along the waterfront. It’s also well known for its intricate ‘hutongs’ – a network of alleyways and courtyards that constitute a traditional Beijing neighborhood.

The night was perfect for a stroll, and Beijingers and tourists alike were out in full force. Some opted for a casual walk, while others rented a paddle-boat and chartered their way beneath neon-lit bridges.

Still more met up with friends to drink in the seemingly endless number of lakeside bars.

As I walked along I was struck at how romantic the scene was. Lights from the restaurants reflected off of the water producing a rainbow glow.

Walking for an hour in various directions, I ended up at the main entrance to the Houhai lakeside promenade, where I concluded my adventure.

Once again Beijing managed to impress!