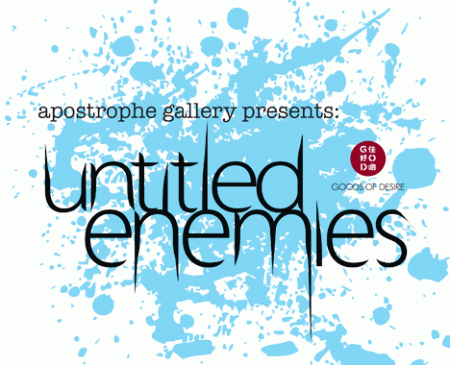 “Untitled Enemies,” the new show by the Apostrophe Gallery, is opening up at The Peak Galleria this Wednesday. The exhibition includes work by a diverse group of artists including six from Hong Kong and seven from England, Australia and the U.S.. (There are a total of twenty-five contributors altogether!)

The collection boasts a wide variety of styles – but what’s the significance of the name – “Untitled Enemies”?

My take on the title is very different from the one included in the press release.

Often urban artists face unique hurtles in executing their work. As their art is exhibited illegally on the streets, rather than in a standard gallery space, it must exist as untitled! (There can’t be a plaque with detailed information hanging next to it!)

Part of the aura of street art is the mystery behind the artist. Who are these people that some would label vandals and enemies of the public? The fact that many of their projects aren’t sanctioned, that they’re done guerrilla-style during the middle of the night, leads to their status as “Untitled Enemies.”

Have a look at this short video from featured artists Meggs and Rone, and maybe you’ll understand!

Of the artists in the exhibition, there are definitely some standouts. The work of Maya Hayuk, for example, is built around intricate geometric patterns of color. Maya has collaborated with the infamous Barnstormers, a group who’ve painted a series of improvisational murals around the U.S..

Apostrophe’s last exhibition included interesting illustrations, paintings and mixed-media work. You can have a look at that show here.

The gallery has done a good job of assembling relatively young artists and making their art available to new collectors. “Untitled Enemies” continues in this tradition by offering a series of signed limited edition prints.