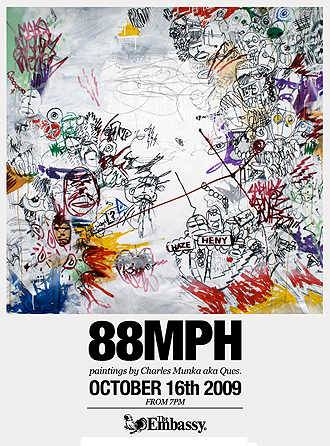 The Embassy features another opening for the second week in a row. This time around it’s a show of paintings titled “88MPH” by artist Charles Munka (aka Ques.)

Born in France, but now living in Hong Kong, Charles is an example of the positive way in which like-minded people can collaborate no matter where they’re located (thanks to the Internet!) As Rakim once said: “It ain’t where you from, it’s where you at!”

Having met the people online who would later form the Brainfeeder Record label, Charles has had success creating artwork for their releases.

Please note that the event is one day earlier than originally scheduled. It’s on Friday the 16th starting at 7pm.

We’ve written about The Embassy before, if you’d like more info on the unique art space click here.