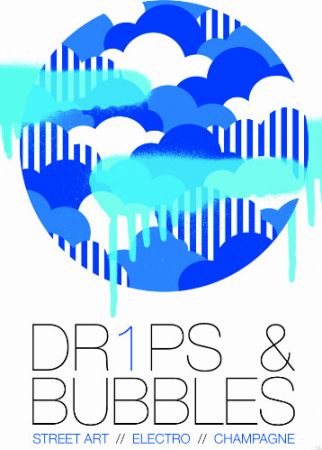 French artist L1ES ONE has been active in Hong Kong for several years now. His art is rooted in graffiti, but often ventures into other territory. On Wednesday, July 29th, he’ll be opening a show of new work titled “DR1PS & BUBBLES” at the private club M1NT in Sheung Wan.

L1ES ONE is particularly good at tailoring his art to different spaces. Curious what his previous exhibitions looked like?

At his last exhibition, â€œLE GRAFF1T1 Câ€™EST CH1C,â€ I was impressed with his ability to transform the rather sleek M1NT interior into something that resembled a heavily bombed building. L1ES literally put his touch on everything, including the shark tank!

An even earlier show took place at the now defunct Six Keyz gallery in Chai Wan. Here he made use of the full interior, including the half-pipe for skateboarding.

The opening on the 29th features new art in addition to music by d.j.s Drafus and Doze. Guests can enjoy a free glass of Ruinart champagne along with the show. The event begins at 9pm and goes until 1am.