It’s sort of unfair doing a collaborative show with an artist whose work prominently features dinosaurs. From an early age, children are practically programmed to love dinosaurs, and even as you grow up, you retain a certain fondness for them.

The depiction of old friends: Brontosaurus, Stegosaurus, and T-Rex, frolicking on Shio Kusaka’s large-scale pottery is an immediate crowd pleaser (especially if you grew up frequenting New York’s Museum of Natural History.) 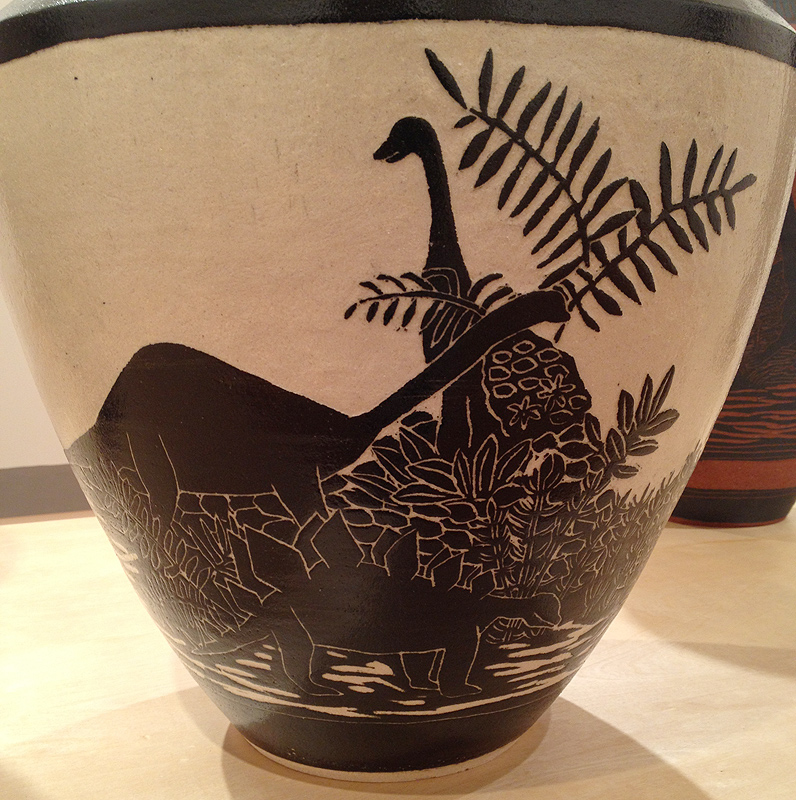 California-based artist Jonas Wood (a painter,) and his wife Shio Kusaka (a potter,) opened their joint show titled “Blackwelder” at Gagosian Hong Kong on Thursday, January 15th. Though the two work in different mediums, their artwork contains an intermingling of shared references.

Apparently, the cross-pollination of ideas runs deep in the family – it was initially their children’s obsession with dinosaurs that precipitated the appearance of the pre-historic creatures in their parent’s work. 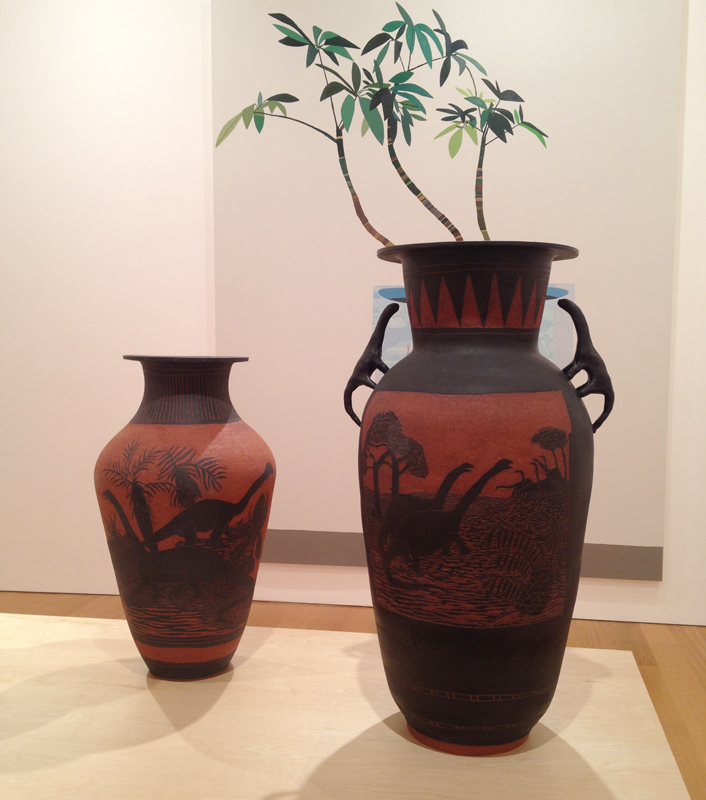 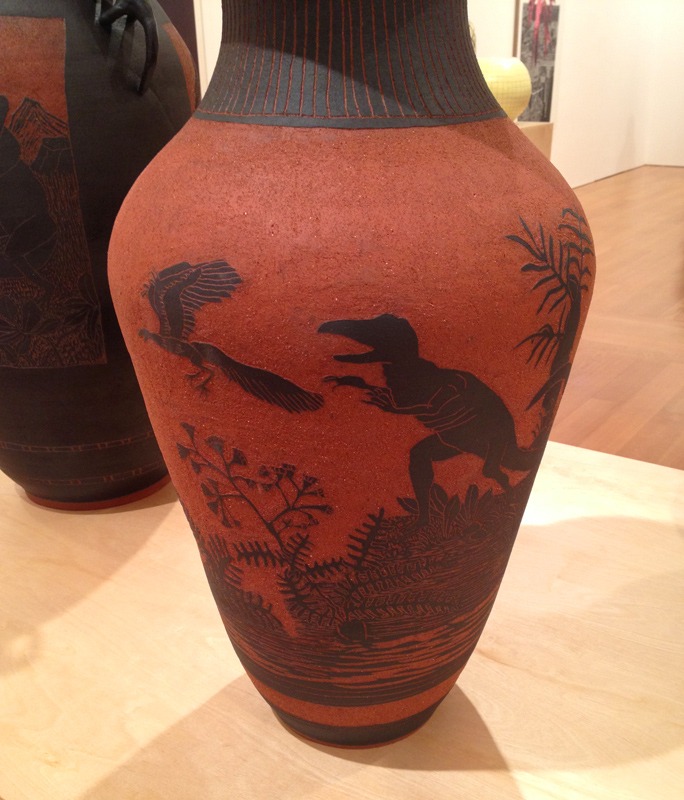 Shio Kusaka’s vases, some of which also contain references to ancient Greek pottery, find themselves inserted into the colorful still life paintings of Jonas Wood. 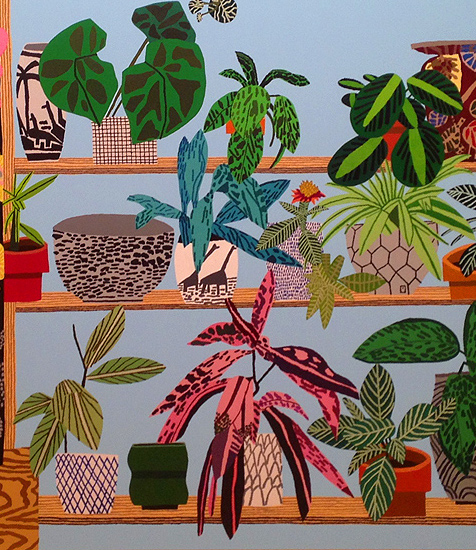 Although bios of Wood often cite comparisons to everyone from Matisse to David Hockney, his art, which has a retro feel to it, may actually be closer to the work of late 1950’s illustrators.

In particular Wood’s landscapes, with their skewed perspective, flatness, and muted color palette are reminiscent of children’s book author Miroslav Sasek who created the popular “This Is” series in the late 50’s and early 60’s.

There is certain degree of nostalgia and familiarity in “Blackwelder,” that may hit a warm spot for anyone who spent hours drawing dinosaurs with crayons on the floor. The paintings are decidedly un-slick and straight forward. 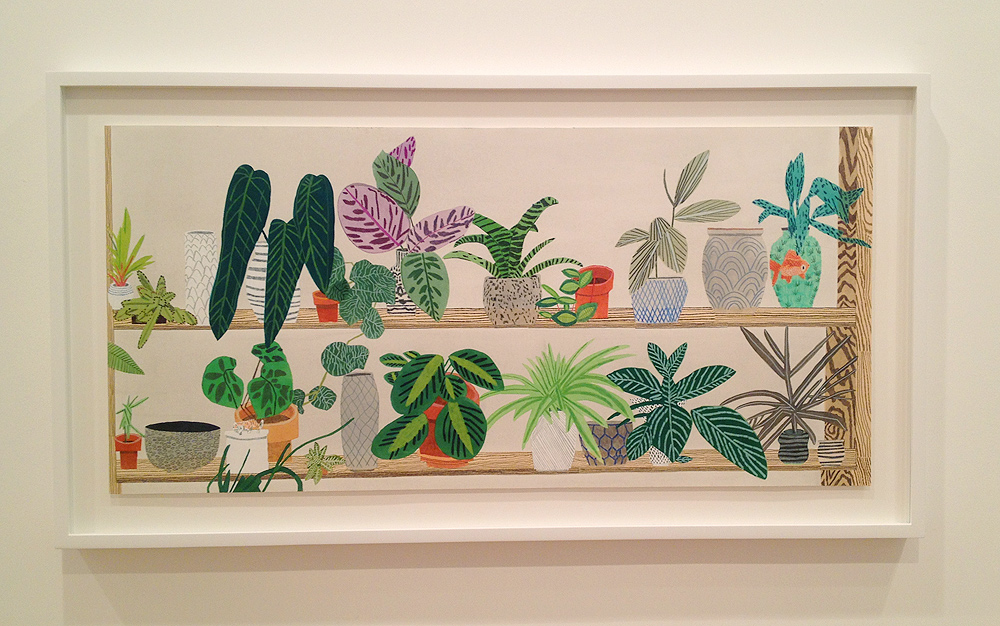 What takes the show into fresh territory is the medium and scale – the large vases and massive canvases add a layer of permanence and stature to the artwork. You get the feeling that these deceptively simple pieces will be one day be favorites in a collection.