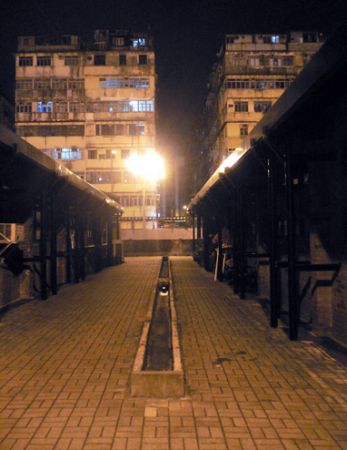 What’s the Cattle Depot? A dive bar? A cool new Western-themed restaurant? No, not quite!

The Cattle Depot is an area in Kowloon nearly a whole block long filled with low-rise brick buildings. It’s literally a cattle depot! The government owns the land and in 2001 they converted it into an “artist village,” with studios now occupying the long, squat row-houses.

I’ve been to the Cattle Depot several times over the years, and it’s definitely an oddity in Hong Kong. Thursday night I headed out to To Kwa Wan to check out an art exhibition there that also featured the d.j. trio Uptown Rockers.

The event was the launch of October Contemporary 2007, a collaboration of eight different local institutions “dedicated to promoting contemporary art and artists in Hong Kong.” But how was the art?

The exhibition took place in several of the buildings within the complex. Visitors would wander from building to building checking out the work.

A few of the pieces were witty, especially if you know Hong Kong culture. For example, the leather bags featured in one installation, were recreations of the multi-colored plastic bags ubiquitous in Hong Kong.

For me, this could also be a great analogy for buildings in the city, which often have gold and marble entrance ways on the ground floor, but when you look up you see grimy facades with people’s laundry hanging haphazardly out the windows. Additionally, the bags were made from cow-hides which sarcastically localizes them for the site of the exhibition!

In the same room there were towers of wooden dim sum baskets resembling Hong Kong’s vertical landscape. I heard a loud crashing sound later in the night… I wonder if someone bumped into them by accident?

Another highlight of the night was the live laser show given by an Australian artist. To a soundtrack of bleeps and sharp electronic sounds, he programmed a green laser to put forth intricate patterns and waves of light. The show was enhanced by a smoke machine, which added almost another dimension to the light.

The Cattle Depot has an interesting mixture of neighbors. The neighborhood where it’s located, To Kwa Wan, is close to the old airport, and thereby historically had height restrictions on its buildings. Since it’s not close to the MTR, it’s been something of a residential backwater. Recently however, with height restrictions removed, large new luxury apartment complexes with fancy names have been going up in the neighborhood. So, on one side you have a block of buildings with crumbling, moldy exteriors, and on another you have shiny modern towers looming over the rest of the area. With this new spurt of high-rise development, the traditional height disparity between Kowloon and Hong Kong Island is starting to be erased.

The Uptown Rockers were the cool factor for the night. With their immense repertoire of music, and knack for for blending genres, they were an excellent choice for the night’s entertainment. They d.j.ed in a large outdoor courtyard in between the gallery buildings.

These guys are used to d.j.ing late night sets that reach their peak at 4 am, with people hanging off of the ceiling, so this event could have been described as relatively mellow! That said, the make-shift dance floor was hopping towards the end of the night and they definitely gained some new fans.