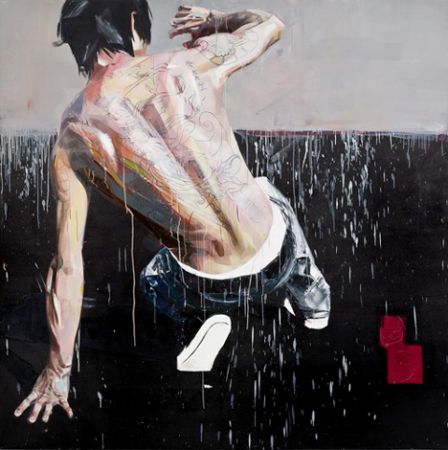 Friday night, April 18th, artist Simon Birch christens the newly expanded Chancery Lane Annex in Chai Wan with a solo exhibition. Simon, one of Hong Kong’s foremost contemporary painters, is in the midst of putting together several major international shows. This is a chance to catch up with his latest work before he’s off again to another part of the world. What to expect? Read on for details about the exhibition, getting to the show and the after-party!

Simon recently put on a large show in Singapore and this exhibit reflects his latest experimentation with other mediums including film, installation and performance art. The show will also feature new paintings.

The exhibition is in three parts. You should start at the 10 Chancery Lane Gallery in Hong Kong’s Soho neighborhood and then continue to the brand new space in Chai Wan for the other two parts. The exhibition opens at 6:30 pm on Friday.

This is an event not to be missed! Not only will there be performances and music at the Chai Wan leg of the exhibition, but there will be an after-party held at The Embassy space, just next door.

The exhibition will be spread between the 10 Chancery Lane Gallery in Soho, and the much larger annex (now known as Chancery Lane Art Projects,) in Chai Wan until May 3rd. Catch it while you can.

For the opening night there will be free shuttle buses running between the 10 Chancery Lane Gallery in Soho and the Chai Wan gallery starting from 6:30 pm and continuing most of the night. Alternately you can take the MTR to Chai Wan, bus number 788 from Central, or go by taxi. The shuttle pick up and drop off point is 10 Chancery Lane in Soho which is just opposite from the former prison, close to Old Bailey Street.

The address of the Chancery Lane Annex in Chai Wan is:

The after-party will be held at The Embassy located at:

A tangent for music fans out there…

“This Brutal House” is a reference to the title of a song from 1986 by a group called Nitro Deluxe that was an underground club classic. The song is a masterpiece of urban electronic dance music similar to Paul Hardcastle’s “Rainforest”. The cut was produced by Aldo Marin who had an earlier hit called Al-Naafiysh (The Soul) in 1984 that was a breakdancing favorite. He and his brother founded Cutting Records, a pioneer dance label that put out early Masters At Work singles.

Check out Simon’s exhibition on Friday for his interpretation of This Brutal House which he refers to as “the reality of life”.