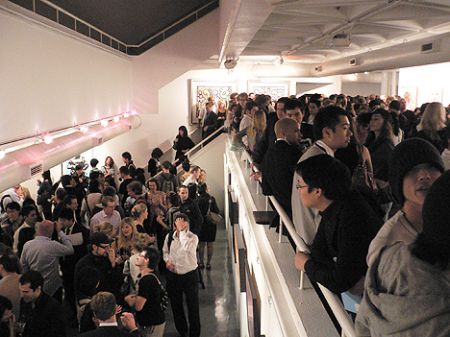 Wednesday night was the opening of Love Art, a collection of contemporary works being shown until April 28th at the Hong Kong Arts Centre in Wanchai. Headlining the exhibition was artwork by Banksy, a relative newcomer who has become increasingly hot at auctions and started to attract celebrity collectors such as Angelina Jolie. His works have a broad appeal due to a combination of witty messages, novel delivery, street credibility and the legendary antics involved in creating his guerrilla art.

The opening began to get crowded at 7pm. The guests were a mixture of neophyte collectors, bankers and a smattering of local artists and scene-sters. The show was divided into two small connecting floors. The first level featured pieces by established contemporary artists such as Damien Hirst, Robert Indiana, Romero Britto, Mel Ramos and Keith Haring. People didn’t seem to pay much attention to these. As the gallery got crowded, most guests were in fact standing around talking and not looking much at the art!

The night was branded as “Banksy Robs Hong Kong,” so the place to be was the lower level where a variety of the artist’s works were displayed.

The pieces included a cross section of Banksy’s works including his remixed British ten-pound notes (featuring a portrait of Diana instead of the Queen,) doors with monkeys on them, rat characters, Kate Moss as Marilyn Monroe (a nod to Warhol,) and various other canvases.

Banksy’s art contains messages that are often poignant, yet funny and easy to digest. For example, a canvas picturing an elephant with a bomb strapped on top says “Heavy Weaponry.” It’s both making a comment and also delivering a message very efficiently.

Yet there’s something in his guerrilla art that seems missing from his canvases. At times it’s like viewing something in 2-D versus 3-D.

Banksy’s artwork often reaches a higher plateau and becomes a profound statement or a sharper social critique when executed in a public space. His placement is key. The location of his works on buildings, roads and walls adds yet another dimension to the works and takes them to another level of commentary and art. His website provides a glimpse of his masterpieces in their primary form.

This is the inherent dilemma in capturing or collecting street art – Banksy’s genius shows through most vividly when his works are in the wild.

Banksy seems acutely aware of the peculiar status of his art as a commodity. He’s played with the concept in his work titled “Morons.” It pictures an auction for a painting that states “I can’t believe you morons actually buy this sh*t”.

The exhibition is on at the Hong Kong Arts Centre until the 28th. A larger collection of Banksy’s work will be debuting at the Schoeni gallery in Soho starting from the 30th and running until May 13th. The opening party will be held on April 29th from 6:30 to 8:30 pm. The Schoeni gallery is located at 21-31 Old Bailey Street in Central.

Banksy’s street art has allowed him to accrue a mass of fans. When I left the exhibition at around eight, there was a long line leading down the stairs of people still waiting to get in.

Leaving the Arts Centre, I walked a few blocks to check out the scene at the launch of Time Out Hong Kong. The magazine held their kick-off at the new restaurant / lounge The Pawn. The building was illuminated in lights provided partially by a truck parked across the street.

Though at one time a very ordinary specimen, the large old stone building looked particularly dazzling and grand.