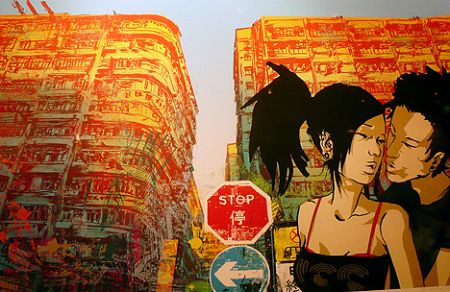 Tuesday night I checked out a solo exhibition of illustrations by artist Jonathan Jay Lee. The show was held at the Fringe Club, which actually houses two separate galleries on their ground floor. The first is just inside the entrance-way, and the second is through a narrow hallway that opens up into a live music venue. The show took place in the latter space.

Moving through the crowd to browse the artwork, one image in particular caught my eye.

I’ve always found Hong Kong to be extremely photogenic. Between the proud new buildings and the crumbling old ones, the city has an abundance of angles, textures, and grit.

One thing that I appreciate is when an artist is able to capture this quality in their work. It’s surprising how few actually do! Perhaps if you’ve lived here all your life you feel desensitized to certain things that others find fascinating.

The image above exemplifies the romantic decay of Hong Kong’s urban landscape. I like it. The composition echoes street scenes you come across every day.

Two members of local band Audio Traffic, Don Cruz and Adrian da Silva gave a short performance that captivated those in attendance. It was a rare chance to hear them play alone, and it really allowed their skills to shine through.

The guitars and vocals jumped out during Tuesday’s performance. Though brief, it was a very solid set and confirmed their reputation as one of Hong Kong’s top bands.

Regarding the art show

The exhibition itself is not extensive. Scattered prints are hung along the walls of the space, which has an awkward multi-room layout. (Perhaps due to the building’s historical significance, it has never been modified.)

At the opening it was difficult to view the art since many of the tables and benches were occupied. It’s great that there was a big turnout, even though the crowd appeared more like a happy-hour get together than people interested in art.

As for a little constructive criticism, I would recommend larger prints next time to achieve more impact. Additionally, some of the images had comic book scenarios written in paragraphs below the prints. I would lose these and let the individual’s mind wander as they gaze at the art.

[photopress:Fringe_club_Hong_Kong_HK.jpg,full,pp_image] (note: this is the entrance to the first gallery, which features another artist. Once inside, take a left and walk through the hallway to get to the Jonathan Jay Lee show.)