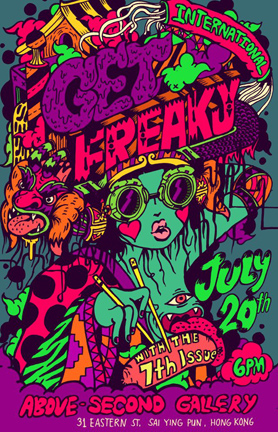 After several solo shows, Above Second Gallery is going back to their roots with a large group exhibition titled “Get Freaky.”

Curated by Supertexte of the French art zine GetFreaky, and by Lee Mei Yan of Hong Kong’s MyJane Studio, the show taps thirty artists from around the world including participants from France, Sweden, Denmark, Thailand, Portugal, Ukraine, America, Romania, Switzerland, Indonesia, and Columbia.

The international ensemble features a range of graphic designers, illustrators, and painters who are “pushing the boundaries of contemporary illustration.”

Have a look at previous issues of Get Freaky illustration magazine to get a feel for the type of illustrations included in the show.

The opening will take place on Friday, July 20th, from 6pm until 10pm. Limited edition prints by the artists will be for sale at reasonable prices.

For more on Above Second, check out their blog.