Is there more to Andy Warhol than Campbell’s soup, Chairman Mao, and Marilyn Monroe? The answer can be found at a major new exhibition titled ‘Andy Warhol – 15 Minutes Eternal’ at the Hong Kong Museum of Art.

In particular, the initial segment that traces Warhol’s early work in the 1950’s is fascinating and provides a window into the diverse range of mediums and techniques he employed as an artist.

Warhol’s illustrations and simple drawings are as powerful today as they were sixty years ago and reveal a side of his art that rarely gets the spotlight.

Presented by The Andy Warhol Museum of Pittsburgh in collaboration with the L.C.S.D. and the Hong Kong Museum of Art, the exhibit is an excellent cross section of work spanning the roots of his career in the 1950’s through the 1980’s.

Also included in the exhibition are a series of Andy Warhol’s collaborations with Jean-Michel Basquiat.

The show hints at the huge volume of art that Warhol actually produced, not just in painting, but also in photography, and film.

The exhibition makes clear that the subjects of celebrity and notoriety frequently dominated his work. His canvases often took persons and images that were iconic and magnified them in some way.

A fun addition to the exhibit were a collection of time capsules that Warhol left behind in the form of cardboard boxes stuffed with whatever he had collected at that moment. The featured boxes contained mementos from Andy Warhol’s 1982 trip to Hong Kong. Looking closely at the tourist map, West Kowloon was as of yet, still water!

The exhibition is divided into two large rooms and takes a good hour to absorb. Quick tip: leave additional time for the second, later period, as there is much more to take in.

At just $20 HKD for adults, tickets are unbelievably cheap for a show of this caliber and scope. 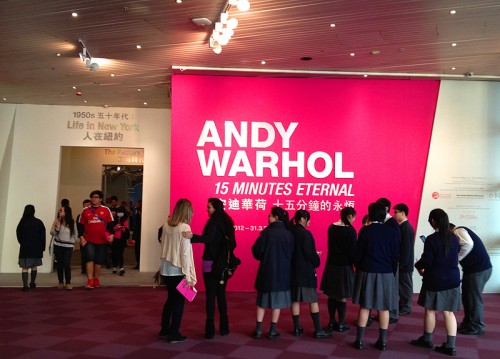