Passing by the Gucci store on Queens Road two weeks ago, something caught my eye. In place of the refined windows that usually greet passersby was instead a series of bright, colorful, larger-than-life characters practically leaping out from behind the glass.

Doing a little research I found out the scoop. For their 2013 Cruise Collection, Gucci’s creative director, Frida Giannini enlisted Japanese manga artist Hirohiko Araki to create an original comic and utilize the story as panels to occupy window displays throughout Gucci stores worldwide.

The story centers around a character who inherits an heirloom Gucci item and goes on a quest to discover its origins. The bright color schemes and hand-painted quality of the illustrations make for a dramatic contrast to the typically subdued window displays of the brand. Passing by in a taxi I immediately noticed the artwork and went back for a closer look.

Some of the characters are wearing pieces inspired by the collection, while authentic items from the 2013 Cruise Collection such as bags and shoes sit nearby in the windows. 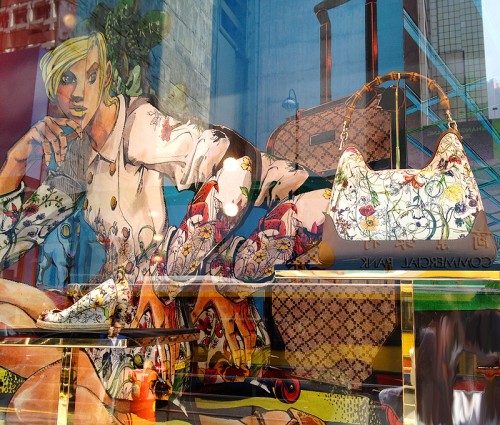 The displays are a fresh look for the brand, and manage to be both enticing and effective!

For a good reference to Hirohiko Araki’s style of illustration go here.

You can catch Hirohiko Araki window displays at the following locations: