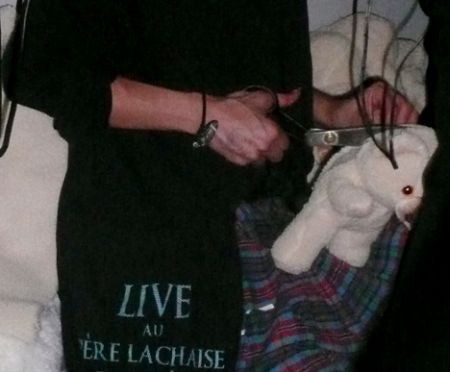 Dismembering a Teddy bear – or remixing it?

Jun Takahashi is half performance artist and half mad scientist when it comes to creating his dolls. He frequently spins around inspecting his handiwork and the placement of furry material. Sometimes he picks up whole sections and starts rapidly sewing with long pulls of the thread.

Saturday night there was a large crowd gathered watching and snapping photos as the noted Japanese fashion designer (along with two assistants,) worked. Some of the onlookers stood captivated, while others shot a quick glance at the trio before continuing on.

Encouraged by a live soundtrack of sometimes striking music (by Kan Takagi and Fran-Key,) it took nearly two hours to assemble a ‘Grace’ (as Jun Takahashi calls them.) What are they made of?

It starts with a few metal pieces that resemble a microphone stand.

Attached to that base are two thin wires with outstretched hands.

The other main ingredient seems to be Teddy bears! There were plenty of discarded Teddy bear heads laying on the ground, indicating that the process uses only the body.

In place of a face, the top center of the Grace is a (working!) light bulb, similar to a bicycle light. Apart from two floppy ears, the bulb serves as the only facial feature. This time around, the Grace had a sort of Victorian Gothic style and was accessorized with diamond jewelry including an ornate necklace. It also featured a diadem or wreath of flowers on its head.

What’s it all about?
It’s not common for the center of an event to be something as slow moving as doll construction, which begs the question – what exactly does the designer want us to get from these performances? Below are a few theories!

Maybe Jun Takahashi just likes the satisfaction of creating a doll? Unlike designing a season of clothing, (which takes a huge amount of time from start to finish,) creating a doll gives him a sense of satisfaction and can be completed within a few hours.

[photopress:Jun_Takahashi_Undercover_Kan_Takagi_HK.jpg,full,pp_image] A large crowd was watching as he worked…

Perhaps doll making offers insight into his creative process – a system of taking things apart and reassembling them in an all together new form. Maybe he’s looking to inspire people to take a sort of alchemist’s approach to design?

On an entirely different level, it’s refreshing to have an event that isn’t overtly about selling you something. Though the motive for the night was the launch of two new fragrances, it was a very soft sell. The two hour doll creation session seemed to emphasize craft over commerce.

Perhaps it’s about sharing. Rarely in our contemporary urban society do people witness the act of creation. Particularly in Hong Kong, we live in a world of instant acquisition, with little or no exposure to the process of how things are made. Most people for example, only know the end product of fashion. Maybe the concept is about exposing a captive audience to share in the wonder of making something?