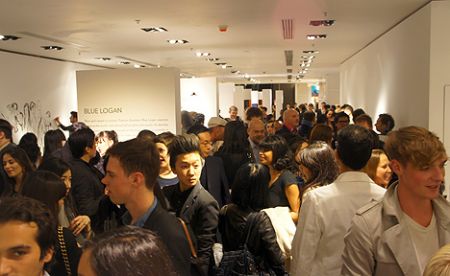 Arriving at the ‘Create & Inspire’ event at Lane Crawford earlier this month, I felt like I had just stepped into a Jean-Philippe Delhomme painting.

Walking inside I was surrounded by a smartly dressed assortment of fashion insiders, movie stars, artists, celebrities, scenesters, creatives, posers and even a few suits.

My initial reaction – where am I?

For the last six years, Hong Kong fashion retailer Lane Crawford has been on a mission to not only transform their image, but to attract the best and brightest from various creative realms. Their plan has expanded beyond the fashion world to include collaborations with artists of all stripes.

I’ve often thought of this type of approach as a ‘salon strategy’. You begin by bringing together a few sharp, creative minds, and then you grow by asking them to invite friends, or people whose work they admire, to help participate. Pretty soon the circle grows exponentially, all spinning around the same nucleus.

Lane Crawford’s sponsorship of the Semi-Permanent creative conference, (which took place on March 11th and 12th,) was in line with this strategy.

The ‘Create and Inspire’ party not only celebrated the start of the conference, but also showcased the success of Lane Crawford’s six year campaign. Looking around, the shop was filled with a sophisticated, urbane crowd that would be the envy of any fashion retailer in the world.

Unlike the Hong Kong of six years ago, no longer do you simply see a throng of well-heeled brand-worshipers, or the status-conscious crowd typical of the city’s fashion galas. Instead, Lane Crawford was overflowing with a diverse turnout of the city’s multicultural (and is some cases, globe-trotting) creative class.

Building alliances with international talent and enlisting artists has clearly paid off. More than by simply having deep pockets, growing a network to support creative endeavors has allowed Lane Crawford to tap into a widening array of talent and has placed the fashion powerhouse on the forefront of trends.

For a little more background on how Lane Crawford reinvented itself, go here and here.

The first Semi-Permanent conference was well-attended, with mostly positive reviews. Out of the nine speakers I saw, Simon Birch, Stefan Sagmeister, and Troika, were the most engaging. In my opinion, next year they should skip the advertising industry people and focus more on the hands-on artists. It was painful to sit and listen to the trite manipulation of the TV advertising world. They obviously believe their own hype, and are proud of their novel techniques at brain-washing. Whether you do it for so-called good or for malice, you’re still being sneaky and manipulative.

The low-light of the conference, most of which was enlightening, was the final panel discussion. The boring format, with no direct interaction from the audience, as well as the dry, academic moderator, (and his knack for cutting off the speakers just when things were getting interesting,) drove away 75% of the crowd from what otherwise could have been a memorable discussion. Though the panelists assembled were competent, the discussion didn’t go anywhere interesting and the intriguing questions remained mostly unanswered.

Three points I would have added to the discussion:

– Fashion brands, and entities such as Lane Crawford are the new patrons of the arts.

– The lack of a world-class art institution in Hong Kong existed because of the view that Hong Kong’s future was uncertain due to the 1997 factor. No one would have invested in an arts museum, which is a serious long-term investment, without a certain future.

– The Hong Kong public does have a sense of art appreciation, but it’s been better catered to by the private sector, rather than government institutions. You can read more about that issue here and here.