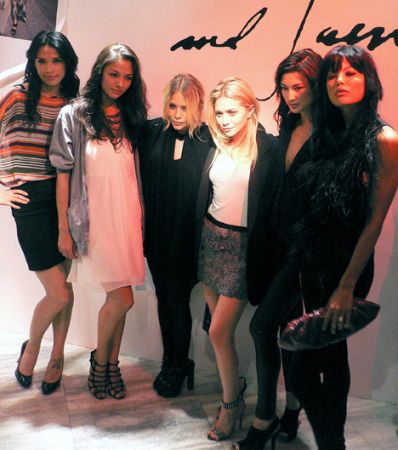 The Olsen twins, Mary-Kate and Ashley, stopped by Hong Kong to launch the Spring / Summer 2008 collection of their Elizabeth and James line. The turnout for the event, held at the fashion retailer Lane Crawford, was strong. Local celebrities, fashion industry insiders, the party crowd and a small but enthusiastic gang of kids were in attendance.

Arriving thirty minutes after the event had started, Lane Crawford was surprisingly packed.

The event took place near the bank of escalators that serve as the main entrance to the upscale fashion retailer. A large area had been cleared out to accommodate the crowd and displays.

Mannequins featuring the Elizabeth and James line were sprinkled around the space. Walls of Polaroids featuring street scenes of New York were put together as well.

(There is something about New York’s urban environment that’s effortlessly iconic. A simple sign for a subway or even a snapshot of a manhole cover provides a strong statement.)

As an alternative to a typical runway show, the models were walking out amongst the crowd, posing and taking Polaroids with small groups of guests. This type of informal show is very effective. Not only do people get a chance to see the clothes up close, it makes for a more dynamic party atmosphere. People love to have their photos taken with models and once the photo was snapped, it was handed over to the party-goer. This gives them a souvenir photo featuring the brand that they can hold onto or perhaps show their friends. It’s a very ingenious way of building goodwill and gathering additional exposure for the label.

At two points in the night, the Olsen twins made brief appearances. Since there was no stage and the crowd was packed, it was difficult to see them. Due to these factors, there was little interaction between the girls and the crowd. The pair seemed a bit shocked at the turnout and the frenzy of cameras greeting them.

Despite the crush, they were good sports and stood around to be photographed with the models.

After the Olsen twins’ final appearance, the event slowly dwindled. I thought it would be the last I’d see of Mary-Kate and Ashley in Hong Kong. Little did I know that I’d bump into the pair the following night at the Bape Heads Show featuring Kanye West, Pharrell Williams and Nigo!